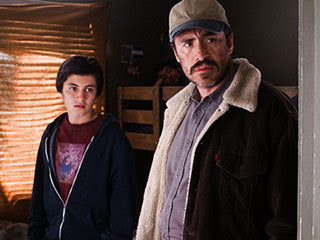 Director Chris Weitz who has done Twilight New Moon and About a Boy puts a very human face on the blight of a father who is in this country illegally. Eric Eason wrote the screenplay from a story by Roger L. Simon about Carlos Galindo works as a yard worker in the hot California sun. He sweats and toils then comes home to his sullen teenage son to sleep on the couch. Life is tough for those trying to eke out a living while staying quiet, keep his head down and be invisible.

Veteran Mexican actor Demian Bichir who is a mega star in his country plays Carlos whose wife left him with his son Luis (José Julián) who was born right after they came to the States. They don't exactly see things eye to eye. Luis sometimes attends a tough school in East LA where violence and gangs are a way of life. In fact his girlfriend is part of gang with a particularly tough reputation. His best friend can't wait until he joins. Carlos can't seem to find the words to keep his son from that path. After Luis is suspended from school Carlos realizes the only way out is the chance to buy the work truck offered by his boss who wants to return to Mexico, even if it means having to borrow money from his sister. He promises Luis that it will help him be successful and they can move and Luis can go to a better school. The problem is that Luis doesn't have a drivers license and trouble if he's caught will result in deportation. The work truck brings a moment of complete joy to Carlos with the simple acts of putting a plastic saint on the dashboard or washing the car. Driving around seeing people in the act of living their lives without constant paranoia. The promise of a better life is dashed when the truck disappears. Carlos goes in search of the thief and Luis who may have saw a chance of escaping the gang life goes with his father to help.

The streets of LA from the perspective of Carlos on foot and by bus is keenly felt when dealing with the various denizens of the area, the gang members, the families, the police activity and the day workers standing outside for a chance to find a few hours pay. When Carlos brings Luis to a Mexican rodeo shows the schism of the cultural differences between those from Mexico and the children born and raised in the States. It takes an effort for Luis to realize that he understands and can speak the language or to appreciate the beauty and unique part of his heritage. Luis sees violence as the most immediate solution in dealing with the thief goes against his father's strong sense of right and wrong. Luis's realization of what his father has done for him comes a little too late.

Bichir's gives a wonderfully touching performance that hopefully will make him a big star this side of the border. Many stories have been done about illegal immigrants from a more political standpoint. A Better Life is a more human story about a father and son. Bring plenty of tissues.
(Review by reesa)

Posted by Dallas Movie Screenings at 12:23 AM

Email ThisBlogThis!Share to TwitterShare to FacebookShare to Pinterest
Labels: A Better Life review