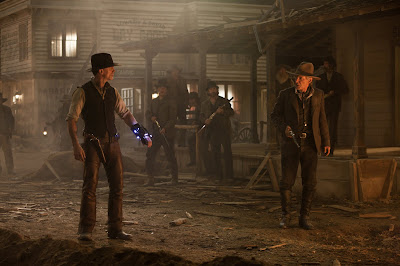 It's the late 1800's and a man abruptly wakes up in the middle of an arid nowhere with an injury on his side and large metal shackle on his arm. There's a picture of a woman half buried in the dirt nearby. He attempts to remove the shackle but it seems impervious. Three men on horse back approach and surround him. Their questions go unanswered. They surmise that he's an escaped prisoner. When they attack he unexpectedly and quickly takes them all out. He takes the their boots, weapons and money and takes off on their horse with their dog following him.

The town of Absolution is run by Colonel Dolarhyde (Harrison Ford) who owns most the land and cattle. People owe their jobs and lives to him so when his spoiled out of control son Percy (Paul Dano) shoot up the place, no one is willing to stand up to him because of the Colonel's cruel reputation. That is until the man (Daniel Craig) with no memory comes to town. After getting fixed up by the gun toting preacher and discovering he has no idea of who he is, how he got injured or what is that thing on his wrist. He doesn't take any grief from the Colonel's son either. Percy ends up shooting a Deputy and gets sent to jail by Sheriff Taggart (Keith Carradine). The Sheriff notices a wanted poster with a picture of the mystery man who turns out to be Jake Lonergran who is being accused of train robbery and murder. The deputies try to arrest him but he takes them out until Ella (Olivia Wilde) the woman who has been showing an interest in him knocks him over the head. She's sorry she did it, but tells him that she really needs him in town.

A big flash in the night knocks a drunk cowboy in the river when he come up the cattle and his fellow hands are wiped out burnt to a crisp. Soon the town is also besieged by flying objects attacking with explosions and grabbing the citizens up with hooks. It doesn't take long before the confrontation between Lonegran and Dolarhyde becomes one of forced cooperation. While tracking the “demons” - people have no point of reference to explain the aliens – they have to contend with Lonegran's unhappy gang and an Indian tribe that wants to blame the white people for bringing in the monsters. Everyone has to team up for the big cowboys, Indians and alien battle.

Based on a 2006 graphic novel of the same name by Scott Mitchell Rosenberg, the movie is nothing like the comic except for the concept of aliens coming to earth in the old west. Directed by Jon Favreau of Ironman and with seven screenwriters including Roberto Orci, Alex Kurtzman and Damon Lindeolf it almost seems like too many cooks in the kitchen. The action is paced to keep your attention from the first time we meet Jake to the ultimate conclusion. Somewhere in the middle it gets bogged down with train robber gangs and rowdy Indians with their own agendas. Craig is too cool for school with those lightening fast reflexes but somehow gets beat up anyway. It's never explained if those moves were enhanced by the alien shackle or Jake is just naturally a ninja. Plus there's the hazy flashbacks as he tries to remember what happened that got him to that point. Ford's Colonel is just plain mean and unsympathetic that they slowly try to soften by small scenes with Taggart's grandson Emmett (Noah Ringer) and the Indian tracker Nat Colorado (Adam Beach). Most of the time Ford plays his usual crotchety curmudgeon. Sam Rockwell is wasted as the bar keeper Doc who doesn't know how to shoot a gun but is along the adventure to save his wife who was captured. Ella is played by the beautiful Olivia Wilde who gets to do another tough action figure as the woman trying to help Jake and has some secrets of her own.

The film looks amazing and the explosions are some of the best around. It's just the story that seems like it's been done before. You can't beat the testosterone of the two male leads. It's nice to see some old school action guys together. Cowboys and Aliens may not be perfect, but it's a great way to spend a night at the movies.
(Review by reesa)

Email ThisBlogThis!Share to TwitterShare to FacebookShare to Pinterest
Labels: Cowboys and Aliens review