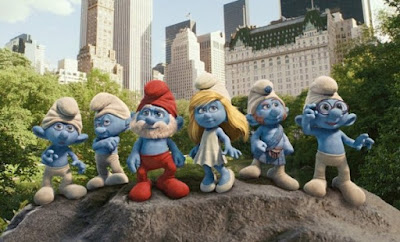 There's a place where sadness is unknown and being blue is being happy. This is the land of the Smurfs who live in this little village with mushroom homes that 's protected by an invisible wall so that the evil wizard Gargamel can't find them. Smurfs are tiny beings that are perpetually chipper. They sing, dance and live in complete harmony. Papa Smurf is the leader and each Smurf has a name that aptly describes them by what they do, like Baker Smurf, Narrator Smuft, and Chef Smurf. There's even one female Smurf called Smurfette. All is good until Clumsy Smurf inadvertently leads Gargamel and his evil cat Azrael to the Smurf hideout. Gargamel starts to destroy the Smurf homes.

Clumsy (Anton Yelchin) escapes the wrong way through the “forbidden” forest. Papa (Jonathan Winters) and some of the others follow him to retrieve him. Gargamel (Hank Azaria) is close behind and the only way out is to jump into the magic portal that opened up because it's the night of the Blue Moon. It hurtles them in the middle of New York City. Gargamel and the cat also dive through the Blue Moon wormhole and soon the Smurfs are being chased through Central Park where they run through a cosmetic launch event. Clumsy falls into some boxes that marketing director Patrick Winslow (Neil Patrick Harris) takes back to his home to work on a new campaign. The Smurfs need to wait until the next Blue Moon to get back home. Before they can leave they must search for Clumsy. Rescuing him is met with mixed results when they encounter Patrick and his pregnant wife Grace (Jayma Mays). Soon they are helping the Smurfs although Patrick is more reluctant. Meanwhile Gargamel has taken refuge in the old Belvedere mansion in Central Park. He plans to use Smurf essence for unlimited power and world domination.

Director Raja Gosnell who has done some light fare as Beverly Hill Chihauhua and Never Been Kissed uses live action and CGI Smurf's. This technology has improved and is used more successfully here than in Yogi Bear just as long as the personal interaction of the real humans and animated beings remain limited. It always seems awkward when someone is trying to pick up a Smurf as it doesn't looks very natural.

Pierre Culliford better known as Peyo wrote the stories which made it's debut in Belgium in 1958. It became popular in the US as a 80's animated TV series. Personally my kids loved these characters but I confused them later with the Keebler elves. The bright colors and inoffensive story line makes this good family fare. Hank Azaria is a hoot as Gargamel if maybe a little too over the top, but it's the kitty who who is the brains and steals his scenes.