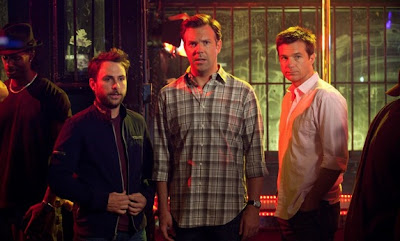 Everyone has has a bad boss once or even twice in their lives. That one person in charge of your career destiny that revels in being able to make people's lives as miserable as they can with the power they possess. In this feature by director Seth Gordon written by Michael Markowitz, John Francis Daley and Jonathan M. Goldstein, three hapless friends have had enough of the abuse by their bosses and conspire to do away with them like in Strangers on a Train.

Nick Hendricks (Jason Bateman) has a manipulative control freak boss Dave Harken (Kevin Spacey) who gives Nick's promotion to himself including the salary. Kurt Buckman (Jason Sudekis) has to put up with the son Bobby Pellitt (Colin Farrell) of his beloved boss who passed away. He's not interested in his father's company only the money that will allow him a frivolous lifestyle even if it means running the company to the ground. They don't consider their friend Dale Arbus (Charlie Day) having much to complain about with his sexually harassing dentist boss Dr. Julia Harris (Jennifer Aniston). They believe their lives would be better, their jobs more endurable if only they didn't have to deal with the daily abuse. So a drunken scheme has them trying to find a hit man who will offer advise takes them to a bar with unsavory characters like Dean “MF” Jones (Jamie Foxx).

The trend lately seems to be mostly about bromances of arrested development 30ish single men. While competent in their jobs they can't navigate the world outside of their limitations. The comedy is painted with broad strokes and while the guys are supposed to be good natured you are supposed to be able to forgive them for actually planning to murder people. Bateman as usual is the straight man to Day's nervous antics, and Sudekis is bland guy who seems to be attractive to women. The bosses ham it up on the screen with Anniston as the dirty talking nymphomaniac who is blackmailing Dale to sleep with her. Farrell is sporting Tom Cruise's bald comb over from Pineapple Express. Spacey has the flashier role as the psycho tyrant which if you didn't know this was a comedy, you would be very afraid. When the guys plans go sideways, it opens the door for more inane and silly situations. The instinct is to laugh as you feel your brain cells dying.
(Review by reesa)