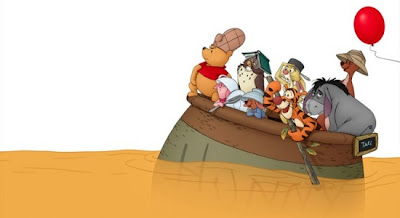 A.A. Milne's 1920's book series of an anthropomorphic bear and his friends called Winnie the Pooh (1926) has been a part of most people's childhood story time. Disney's franchise started in the 70's giving voice to a series of animated adventures of Winnie the Pooh a teddy bear owned by Christopher Robin. The first film since 2005 is based on three stories “In Which Eeyore Loses a Tail and Pooh Finds One”, “In Which Piglet Meets a Heffalump” and “In Which Rabbit Has a Busy Day and We Learn What Christopher Robin Does in the Mornings”. Winnie, Tigger, Rabbit, Piglet, Owl, Eeyore, Kanga, and Roo embark on a quest to save Christopher Robin from an imaginary culprit. Anyone familiar with the books will recognize these stories.

John Cleese narrates and interacts with Pooh spilling him out of his bed from the book pages. Pooh is always out of honey so in his search he comes upon Eeyore who has lost his tail. The next day Pooh finds a note from Christopher saying “Gone Out Bizy Back Soon”. Because he can't read the note he takes it to Owl, but Owl doesn't understand it and the friends begin to believe that Christopher has been abducted by a monster called “Backsoon”. Owl says Backsoon is the monster that causes all bad things to happen to you. They decide to build a trap but that back fires and they are trapped. Piglet tries to rescue them, but he's so timid. Eventually they get out with Pooh's help and Christopher shows up and said he was at school. Still hungry, Pooh goes to Owl's house and notices the bell pull looks just like Eeyore's missing tale.

Drawn by hand by the Disney Animation Studio, the drawings were scanned into computers and the images and watercolor backdrops were digitally painted. They retain the old school feel of the earlier films and a hint of the original drawing from the books. The movie thankfully avoids the Disneyfication of it's overly cute and trite characterizations. The nostalgia element keeps this series moving. The beloved characters are just as they always have been. The three story lines keep the younger audience from being too bored for their sound byte minds.

The movie is directed by Stephen Anderson and Don Hall, written by A. A. Milne and Burny Mattinson. It's produced by Peter Del Vecho, Clark Spencer, John Lasseter, and Craig Sost, and narrated by John Cleese. The voices are done by Jim Cummings as Winnie and Tigger who has done Winnie for more than 25 years. Tom Kenny as Rabbit, Craig Ferguson as Owl, Travis Oates as Piglet, Bud Luckey as Eeyore, Jack Boulter as Christopher Robin, Kristen Anderson-Lopez as Kanga, Wyatt Dean Hall as Roo. The six song soundtrack are by Kristen Anderson-Lopez and Robert Lopez. Zooey Deschanel does the Winnie the Pooh theme song. Good classic Winnie the Pooh that will be a welcome addition to your DVD collection.
(Review by reesa)

Email ThisBlogThis!Share to TwitterShare to FacebookShare to Pinterest
Labels: Winnie the Pooh review