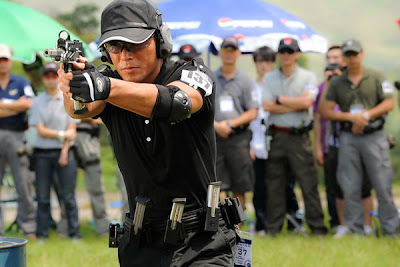 A triple tap is when a shooter is able to fire three rapid shots at the same spot. Ken Kwan a foreign exchange banker beats cop Jerry Chong in a shooting competition. It's a close call but even Jerry is impressed when he sees a triple tap on one of the targets. On the way home from the contest, Ken witnesses a armed robbery of armored truck containing bearer bonds. Ken becomes a hero when he stops all but one of the robbers with his competition pistol. Even though he saved a traffic officer who came at the end of the shootout, Jerry has to charge Ken with three counts murder and illegal violation of the Firearms & Ammunitions Ordinance Act.

Louis Koo stars as Ken Kwan who becomes a media hero is later released after being brought up on charges. He's honest and straight forward on the stand. Ken is not all that he seems. He's dating a nice nurse Ting (Charlene Choi) who loves him but his supervisor at work Anna Shaw (Li Bing Bing) is also romancing him using the promise of promotion and material gain. Shaw sets him up to win the best foreign investor award at the annual dinner. But Ken has been illegally accessing funds at his investment film trying to cover his losses. Ken is not a happy sort of guy, and doesn't really treat Anna with much affection. He resents her acting like she owns him.

Ken is attacked at his home and is surprised that the cops are there right away to scare the perp off. They believe it may be one of the robbers who got away and they plan watch even his nurse girlfriend for safety. Ken is being followed too. Visiting him at the Ken's workplace Jerry notices Ken's hand shaking and he tells him that it's because he killed someone and he's seeing a psychiatrist to help him sleep. As Jerry looks into Ken he finds him well educated and controlled with a psychology and economics background. They are very close in character so the cat and mouse tension between the two add add another layer of competition. As the pieces fall into place, Jerry suspects that Ken may be involved somehow.

Director Derek Yee wrote the screenplay with Tin Nam Chun and Ho Leung Lau as possibly a sequel to Double Tap of 2000 that Yee also wrote contained a similar story of a shooting competition. Alex Fong plays Miu Chi-shun the same character as in the first movie giving Jerry advise in his investigation. He tries to get in the head of the shooter to find his motivation. This psychological thriller is interesting with it's twists and turns but it lacks back story to some of the characters. Jerry's professionalism tries to pressure Ken who is slowly going nuts as his culpability is being exposed. Since there's no emotional investment in these characters it makes it hard to really connect to the outcome.
(Review by reesa) 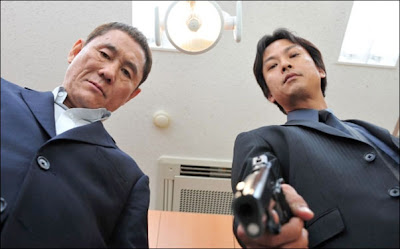 Takeshi Kitano wrote, directed and stars in the 2010 film about the power struggle of Tokyo's Yukuza clans. Kitano started out in 1972 as part of a comic duo called Two Beats and he's still known as “Beat” Takeshi. He's responsible for such films as The Blind Swordsman Zatoichi, Kikujiro and his last movie about the Yukuza, Brothers. Outrage competed in the 2010 Cannes Film Festival is soon to be followed up in a sequel Outrage 2.

There are numerous crime families in the Japanese underworld. They are governed by the strict code of honor and respect and by the head of all the families, The Chairman (Sôichirô Kitamura). Outrage begins with the The Chairman's lieutenant Katô (Miura Tomokzu) asking about Ikemoto's prison pact with Murase. The Murase clan wants to associate with the Sanoukai clan. The Chariman is unhappy with Murase's drug trade and wants Ikemoto (Jun Kunimurato) to bring the Murase clan in line. As the orders pass down the food chain, Ikemoto's subordinate Otomo (Beat Takeshi) and his crew are given the task. The befuddled Murase boss is played by Ishibashi Renji who is an old school Yukuza and can't seem to adjust to the modern world of the syndicate. The Chairman suspects that Ikemoto and Murase are up to something.

The complicated hierarchy of the families make it hard to tell who belongs to which family. The Chairman is manipulating everyone so pretty soon underbosses are killing their bosses. No one is safe from betrayal and greed. Takeshi plays the same world weary character that he's played in other movies. His Otomo pays a bloody visit to Murase at the dentist that is pretty gruesome. Otomo doesn't even flinch when a roomful of his crime family is blown up in the other room. The interludes move from one violent encounter to another. Basically the movie is 2 hours of Yakuza yelling and you can't go more than a couple minutes before some one gets the crap kicked out of them. Like the old gangster movies of the American 20's full gang war is raging in modern day Japan. Of course some of the violence has a humorous element to make it interesting to the viewer. Like you won't look at chopsticks and a bowl of noodles quite the same way again. Overall, despite the fact it's hard to keep track of who with everyone dressed in the same black suit with sunglasses looking like Asian Blues Brothers with guns. It's definitely not boring.
(Review by reesa)