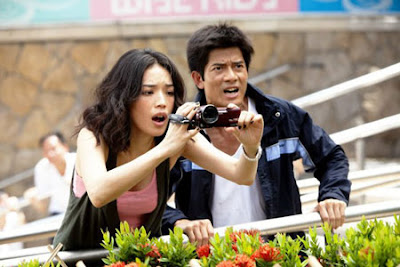 In 1945 Malaysia during the end of WWII Japanese prisoners were sent to a underground cavern where a mutated man, large and muscular attacks the prisoners. The Japanese Captain in charge is angry because the men he sent down were supposed to be the next test subjects. Suddenly the British attack burying the caverns along with any secrets inside.

Orphaned as a child to a former knife throwing champion, Sunny (Aaron Kwok) is now a clown since he did not inherit his father's skills. He really dreams of doing the the Flying Dagger act. His cousins in his uncles circus troupe torment and ridicule him. One night he hears them talk about exploring some caves where there is supposed to be gold. He follows them to where they find some others who have blown up hole to gain access. The cousins beat them up and chase them away. Clumsy Sunny drops on them unexpectedly so they decide to use him as a point man. When they find some crates, they have Sunny open them first which reveals gold. They try to kill their cousin but some of the crates have capsules which contain the experimental gas that transforms into vein bursting super mutant monsters. The evil cousins turn their evil into gang pillaging and ravaging when they go back to Hong Kong. Sunny, who had run off had fallen onto a passing ship after being exposed to the gas doesn't turn into such an ugly creature only big and chubby with no neck. Apparently he has some antibodies that that prevented the really ugly part. The guys on the ship think he's contagious so they throw him overboard. He ends up back on shore getting a ride from a pretty young woman who needed a tire fixed. He's still a goofy guy, only more chubby. Later that night Sunny loses all that water weight and now looks like himself again. But now he's got some super skills, lightening reflects, super strength, sight and hearing, unfortunately he's still not very bright.

Sunny sees reporter Angel (Shu Qi) who had the flat tire is at the scene of a bank robbery. Using his super skills he manages to stop the robbers with a chop stick. The press converge on him and his heroics. Angel gets him out of there as her exclusive story. There are also two mainland cops Suen (Wu Jing) and Ching (Zhang Jingchu) who believe it or not work for the mutant crime division. Not only do they have mad fighting skills, they are also a couple planning to marry. To make things more complicated evil mutant cousin Cheung has some unresolved love issues with Angel. After they see Sunny on TV and realize he survived they decide to get him in a Mutant vs mutant battle.

Hard to believe that Benny Chan directed this feature before doing Shaolin. These movies are different to the extreme. Sunny becomes an media star doing commercials and promotions, all the things that most superheros would not be caught dead doing. Meanwhile the cousins continue to mutate. Everything about this movie is over the top, campy, scifi, circus clowns, monsters, knife throwing, stuff blowing up and love stories all mixed in to a fun filled mess.
(Review by reesa)