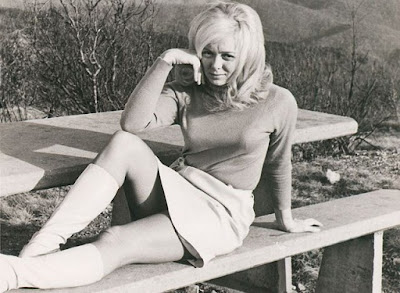 The recent Earl Morris film, “Tabloid” recounts the 1977 incident involving Joyce McKinney and her alleged kidnapping and rape of her Mormon boyfriend, Kirk Anderson, in England while Kirk was on a missionary retreat. Most of the screen time is taken up with Joyce telling her side of the story interspersed with a cohort of Joyce’s in the “kidnapping” plot, a couple of British news journalists who covered the story when it broke and an ex-Mormon zealot who shares some biting and funny commentary on Mormon beliefs. The movie plays out in two parts, the first is the detailed account of the incident and Joyce’s subsequent tabloid notoriety and the second deals with the cloning of her pet pitbull “Booger”. I guess you can view Joyce as one of the first celebrities to gain fame simply because she was in the paper. Her unabashed obsession for the dumpy repressed Mormon boy Kirk, the sexual intrigue and salacious photos ignited the imaginations of the Brits. Joyce was the girl next door combined with a sexpot figure and the reputation of a harlot. When the press became more invasive and discovered a seamy past Joyce retreated into sullen denial. Its then that she talks about the brutal attack by her overmedicated pet mastiff and how she was saved by the heroic “Booger”. When “Booger” passes she manages to get a scientific team in Korea to clone him resulting in a six puppy brood of “Boogers”. All this propels her once again in the public eye and into the tabloids. Earl Morris has a penchant for the American oddball but Joyce is not the most compelling, her vivacious histrionics and bland insights make her more eccentric than endearing. Also Mr. Morris skips over the question of where did Joyce come up with the funds for all these escapades? There’s a lot of cheap laughs here and consummate editing, vintage film clips and faux tabloid headlines serve to accentuate and comment on the talking heads, but Joyce remains a cipher, either an adroit manipulator or an ardent simpleton.
(Review by Steve Cruz)