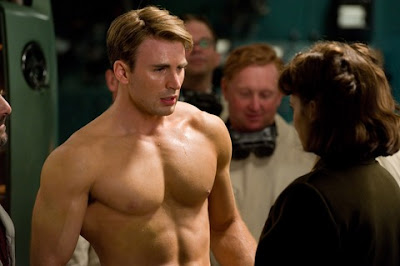 In the frozen north a Russian oil team reported a very large object possibly and aircraft embedded in the ice. American scientists come and cut a hole to lower a team of investigators down to investigate. What they find at first is a Captain America shield.

Flashback, it's Norway 1942 Johan Schmidt (Hugo Weaving) who is the commander of Hitler's Occult division finds Odin's treasure the cosmic cube called Tesseract. The bright blue lighted cube is powerful enough that Schmidt and his scientist Dr. Zola plan to harness the unbelievable energy within so that it change the course of the war.

Back in NYC, Steve Rogers (Chris Evans CGI'd into a very small man) underweight, short, and asthmatic tries several times without success to join the army like his best friend Bucky (Sebastian Stan) who is leaving for duty in England. Scientist Dr. Abraham Erskine (Stanley Tucci) over hears the young man's sincerity when he explains why he wants to join up. So Erskine intervenes during the medical examine for the young man to join Strategic Scientific Reserve. The recruits do all the basic training but the thing they can't learn is the ability to think beyond themselves. When the colonel throws a grenade into their group everyone runs away except for Steve who uses his body as a shield to save everyone else. This self sacrifice puts him at the top of the list for the experiment to make him a super soldier. Erskine is impressed with Steve's innate goodness. Steve doesn't want to kill, he just hates bullies. The serum was used once before in creating Schmidt whose penchant for evil was exacerbated turning him into a monster. Steve comes through bigger, stronger, and handsome.(An un-CGI'd Chris Evans). The epitome of the all around good guy hero. Ready to do what he can to save the world.

Director Joe Johnstone has brought us The Wolfman, Hidalgo, Jurrassic Park III does wonders with another Marvel character. The first Avenger for the new Avenger's movie due next year gives us something to look forward to next summer. Based on the Marvel comic by Joe Simon and Jack Kirby the screenplay was brought to life by Christoper Markus and Stephen McFeely. the 3D isn't even annoying giving the scenes some depth. The origin story introduces the hero during WWII the costumes, the language pattern fit the old films of the time. Later when fighting the Nazi's then with Schmidt's private Hydra army there's a sense of the old war films of the time with his team of loyal soldiers. Hugo Weaving plays Schmidt with all the arrogant oiliness of a mad man with a red skull. Peggy Carter the agent with the British accent, a crack shot is the love interest who believed in the skinny Steve to do something special. Tommy Lee Jones is the Colonel who doesn't believe at first that Captain America is anything but a shill to sell War Bonds. He has the best lines in the movie. Howard Stark father of Tony Stark of Ironman is played by Dominic Cooper. Well paced with plenty of action there's some enjoyable humor and Chris Evan's pecs. It's probably the best of the super hero movies so far this year. Please note you don't have to wait for the easter egg after the credits. There isn't one. Chris Evans is solid enough to lead the Avengers on the next adventure. Looking forward to it.
(Review by reesa)