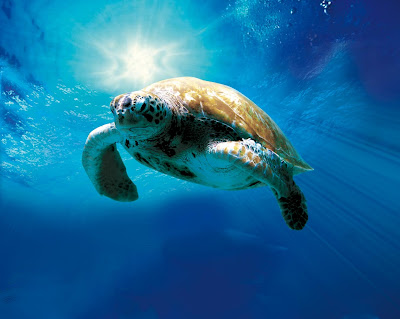 Loggerhead sea turtles are distributed around the world and spends most of it's life in saltwater. In this documentary directed by Nick Stringer and narrated by Miranda Richardson, it follows the path of a female turtle from it's hatching on a Florida beach to it's extraordinary journey along the gulf stream to the frozen north, Africa and back to the beach.

Hatchlings dig for three days to reach the surface. It's the size of a child palm and it must make it's way to the water. Of the two million turtles born on Florida beaches more than half will be picked off by sea gull and crabs. Those that reach the sea fight the waves, diving sea gulls, and other sea creatures. The little turtle is swimming with fins the size of butterfly wings to reach the gulf stream. Forty eight hours and 70 kilometers later, until the turtle finds a life raft of seaweed where she can find shelter and finally sleep. The gulf stream is like the ocean's freeway and home to migrating fish, whales and dolphins. The little turtles are not in the same rush and are happy to use the seaweed rafts that move about eight kilometers per hour feeding on tiny shrimp. It is believed that loggerhead turtles use the Sargasso Sea where they use the seaweed Sargassum to cover from predation until they are mature. Of all the predators of the ocean turtles are immune to the poisonous Portuguese Man-Of-War tentacles and find them good eating. Besides the usual predators the turtle must survive storms, oil dregs from passing tankers and freighters, fishing nets and hooks in their two decade travel that takes them to Nova Scotia, to across the Atlantic to Africa, back to the Caribbean. By the time it heads back to it's beach in Florida where it will lay their eggs to start the cycle all over again the turtle is now 84 inches long and 300 pounds.

Stringer used rescued turtles in some scenes using a specially built marine studio. Interactions with other sea creatures were enhanced in the latest special FX and blue screen technology. Some turtles were created using modeling and texturing and animation indistinguishable from real live turtles. Although digitally manipulated visuals are not new to nature films it doesn't take away the fact that loggerheads are an endangered species. The story about one turtle's journey, a journey that turtles have been making for 250 million years is compelling and fascinating. One that children will enjoy with their parents that will hopefully make them aware of our environmental responsibilities.
(Review by reesa)