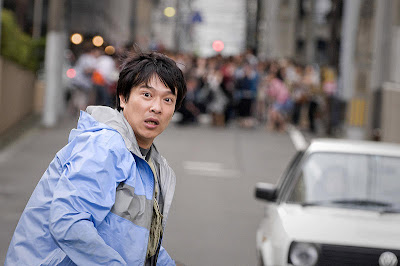 Aoyagi is a nice humble sort of guy. A couple years earlier he had saved a pop star from attack when he was out doing his delivery job. He had a hero image. Maybe that is why a college friend Morita was offered a pay off for his debts by setting Aoyagi up to take the fall in the assassination of Japan's Prime Minister. Thinking they are going on a fishing trip, his friend gives him a sedative in his water. When Aoyagi wakes up, they are near the PM's parade route, and he confesses the plot. He asks him if he has met anyone mysterious lately. Morita tells Aoyagi to run before their car blows up as well.

He gets a phone call from a woman who he met at a cyber cafe. She tells him to meet at her house. While watching the news he sees the bomb was activated by a radio controlled helicopter. The room he's in is full of helicopters. Later he finds his image is being broadcast on TV as a possible suspect. Everywhere he goes he's either being recognized as the guy who rescued the popstar or by government agents bent on killing him. The National Police hurt his friends in order to get him to turn himself in. They explain it's all about image and they can manipulate the information.

A serial killer on the loose known as Kill-O comes to his aid because he's impressed and helps him on impulse especially when Aoyagi is in tight spots. He thinks he knows the doctor who did the plastic surgery to frame him in the videos. But thing go wrong again. An old gangster at the hospital had told him the only way to turn himself in is that he must do it with TV cameras in a public place. He also tells him about a series of storm drains. And he mysteriously has manhole covers. There are blockades everywhere. The TV broadcasts are full of stories and speculations on what he may be doing. His parents, friends and family are pulled into the controversy but they don't believe he is guilty. A cop catches him urinating by the side of the road and he knocks out the cop. The cop is touched by Aoyagi's fathers statement to the press, and offers him solace and advise.

Fish Story director Yoshihiro Nakamura based the story on a novel by Kotaro Isaka meanders quite a bit. No reason is given for setting up Aoyagi except they needed a patsy. Masato Kakai as Aoyagi is innocent, yet resourceful. The flashbacks of their college days are sometimes confusing. All set to the Beatles song Golden Slumbers sung with a Japanese accent. But it's a fun curious tale that speaks of friendship.
(Review by reesa) 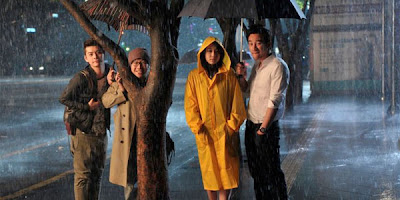 A theater troupe of 4 people offer a unique service of acting cupid for lovelorn clients. They investigate the object of their clients attentions and mastermind a way for them meet with the ultimate goal of romance. They do everything from image redo's, creating scripted scenarios, coaching them on how to deliver the lines that will melt the heart in question, even adding more rain as the scene demands. They are not adverse to sending in actors hired just to get one of the parties jealous or to add background to the scene. It's like a Mission Impossible job, only with love.

The boss and one time acting teacher Byung-Hoon (Uhm Tae-Woong) is hesitant about the newest client Sang-Yong (Daniel Choi). The straight laced, awkward financial trader who is smitten with a free spirited woman Hee-Joong (Lee Min-Jung). He first saw her upstairs in church when she sneezed out her gum into his yawning mouth on the ground floor. The boss says he's got a bad feeling about this particular job. The first scene they set up to gain her attention goes terribly wrong when Sang-Young doesn't stick to the script. In fact he never sticks to the script to their dismay. The next one at the church doesn't go well either when the minister turns out to be her uncle. Despite the team feeding him things to say and do, it almost seems doom to fail. He offers to give the client his money back, but they already spent it paying off their bills and loan. Team member Min-young (Park Sin-hye) notices that maybe the boss isn't putting his full focus of the job at hand. Turns out Hee Joong is Byung-Hoon's ex-girlfriend and he may be sabotaging this latest case in the name of love.

If one thinks about the premise of the Cyrano Agency there's probably a lot of ethical questions on setting up people to fall in love. Director/writer Kim Hyeon-Seok manages to move the action and the comedy along quickly so that it's entertaining and diverting. The cast is filled with favorite Korean TV drama stars like Lee Min-jung of Midas and Boys Over Flowers, Park Shin-hye of You're Beautiful, and Daniel Choi of High Kick! There's also Park Cheol-Min who is in literally in everything and Uhm Tae-Woong from Dr. Champ and Stranger Than Paradise. Koreans are great at fun romantic comedies and this works well.
(Review by reesa)

In China's early Republican era, the land is plunged into strife as feuding warlords ravage the land and people for power. The warlord Hou Jie defeats rival Hou Long who flees to the Shaolin Temple to hide. Gravely injured Hou Jie admits defeat and hands him the power to Dengfeng, Henan.. Despite the abbots plea, Hou Jie shoots Hou Long and writes “empty words” on the Temple's sign The Source of all Martial Arts.

Foreign officers want to trade automatic guns to the General Hou Jie (Andy Lau) in exchange for railroad rights through his land. But the General believe that opening the doors to the railway will open the doors to losing their country. He belittles his deputy Cao Man (Nicholas Tse) for wanting to do business with them. He's also afraid that Song Hu (Shi Xiaohong) will want those weapons, so he asks Cao Man to eliminate him. Commander Song Hu is Hou Jie's sworn brother, but Song wants to marry off his son to Hou Jie's young daughter. They set up and engagement party to trap Song. Cao Man feeling used and thinking he deserves better betrays his General sending assassins to murder him and his family instead. In the ensuing mayhem, he shoots Song Hu but Song hu saves him from the ambush and letting him escape.

Hu Jie rushes his fatally injured daughter to the monks that he had earlier defiled. Despondent over the death of daughter and his wife leaving him, Hou Jie feels guilty for his past deeds he wanders near Shaolin. He falls in a pig trap made by Wudoa (Jackie Chan) the cook monk who provides him with food and shelter. He trains with the monks and comes to understand martial arts and finds a way to peace and enlightenment by releasing his need for revenge. One day he hears that his deputy has taken over the army and is oppressing the people to unearth Chinese relics to sell for automatic weapons, then killing the laborers to keep them silent. When Cao Man finds Hou Jie still alive, he attacks the Shaolin temple and the foreigners also join the frey bombarding the temple with artillery. Eventually Hou Jie and Cao Man have a confrontation with karma payback.

Directed by Benny Chan who also did City Under Siege another film featured at the AFFD. Shaolin tells the story of a man once cruel, full of anger and greedy for power who finds a way to forgive himself and learn to become humble.. Andy Lau, known as a perfectionist, really shaved his head for his role as a monk. Although not a real martial artist like Jackie Chan he manages to make the fight scenes look pretty amazing. As with Chinese films there is some wire work, but not overly exaggerated. Jackie Chan as the cook who doesn't do martial arts, manages to fight the way he cooks in a well choreographed battle aided by real Shaolin kid monks. His easy going nature is a breath of fresh air to the seriousness of the story. The film is not just an martial arts film so if you expect socky choppy forget it. What you get is a good character driven story with excellent performances especially by Andy Lau and Nicholas Tse.
(Review by reesa)