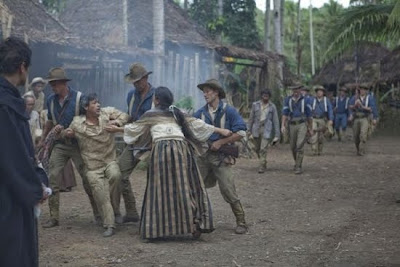 Independent director John Sayles who back in the 80's gave us such films as Return of Secaucus 7, The Brother From Another Planet, Eight Men Out. Then the 90's there was City of Hope, The Secret of Roan Inish, and Lone Star. He did less films in the following decade most notably Sunshine State and Honeydripper. Now 60 years old he brings us Amigo a story set in the Philippine-American War in 1900 after the US freed Cuba from being a Spanish Colony. The American's were supposed to leave after ridding the islands of Spain, but they ended up staying.

In the small barrio of San Isidro Rafael Dacanay (Joel Torre) is the village leader. He owns most of the land, and the villagers work the rice fields for a share of whatever is produced. His brother Simon is the leader of the local rebels hiding in the jungles. They had forced the Spanish guard to surrender and Simon had his brother lock them in the granary as prisoners along with the Spanish friar Padre Hidalgo (Yul Vazquez) in the name of the revolutionary government. Rafael argues with his son who decides it's better to be with the rebels than to accept more occupation from another country. Colonel Hardacre (Chris Cooper) shows up with his troops while chasing General Emilio Aguinaldo. He has Lt. Compton (Garret Dillahunt) set up a garrison in the village using the Rafael's house. They release the barrio prisoners but the friar decides to stay for “his children”. But the sanctimonious priest may have other reasons for sticking around. The last thing his commanding officers tells him is that they need to win the hearts and minds of it's citizens. Rafael is being put in a difficult situation since he must keep supplying the rebels with food and information while appeasing the American soldiers. When asked his name Rafael says it's “Amigo”...friend.

The dialogue is in Tagolg, English and some Chinese. The American's use Chinese coolies left over from the Spanish to do all their laundry and heavy work. Their view of their employers are not very favorable as long as they get paid for their work. The American's call the local population “monkeys” and make fun of the sound of their dialects. The Filipino's in return think the “white ghosts” to be just as annoying and clueless. Rafael has to find a balance to keep the soldiers from killing everyone in the barrio, keep them from finding the rebels, and make sure they can harvest enough food. One of the soldiers gets smitten by a local woman despite the racism that is common within the troops. Another falls prey to the local moonshine. And Lt Compton once a a house builder sees villages in terms of how it was made.

As usual history is written by the conquerors. In this tale although both sides of the story is given, the invading “ugly American's” don't fare well. No sooner than Lt. Compton who follows orders as any good soldier is also compassionate and is able to bring a sort of workable peace to the barrio, the powers that be decide that a stronger hand must be played to weed out the revolution. If that means cutting off the food supplies and enacting martial law. Their buffalo are slain and the fields are burned. Violence increases and tension escalates.

Not too many movies have been made about this piece of history. Sayles story is linear and well told. It's photographed in the rich warm tones of the Philippine countryside. There are moments of rural culture displayed like the festivals and funerals. It's at once a a history lesson and a travelogue. At times the story seems that it's been told before. It's just set in a place where more stories need to done.
(Review by reesa) 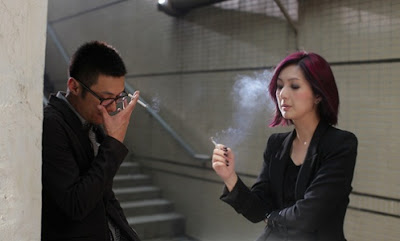 Love in a Puff

Hong Kong has instituted a ban on all indoor smoking areas and even outdoor places. This forces smokers to gather in secluded areas near trash bins on their breaks. In just one week the camera captures series of personal interviews while following a group of people who gather in this one alley. They talk about how it's just another way of meeting others and communication.

They tell each other horror stories. In fact the movie opens with a security guard hearing a man trapped inside the truck of the car. When he gets the police to open it up, there is no one there. One shares food from his food delivery service. Then one offers a story of his coworker Jimmy Cheung losing face at dinner when some damning evidence was found on his girlfriend's bracelet in front of everyone who was at a dinner. Cherie who works at Sephora starts to flirt with the cuckolded boyfriend who came for a smoke. Cherie is also asthmatic and should probably quit smoking. The camera follows them around like voyeur as they attend a costumed birthday party at at karaoke bar. Jimmy is disappointed that Cherie's got a boyfriend of five years. They start to see each other anyway, mostly just hanging out smoking, talking, but boyfriend Carl is getting suspicious. She decides to spend the night in a hotel with Jimmy. Although nothing happens between them. He tells her that they don't have to do everything in one night, that there was plenty of time. She is really touched. The next day she asks him to switch phone networks because it's costing her too much to text him. He doesn't want to and things get uncomfortable between them.

The Government decides to raise the price of cigarettes and they run out to stock up while they are cheap. Cherie and Jimmy run into each other then travel around town stocking up on packs. On the way the car breaks down. They bicker and she confesses she's more than 3 years older than he is she's actually 4 years older. But in the end they decide to quit smoking and fall in love.

Directed by Pang Ho-cheung who co-wrote the script with Heiward Mak, Love in a Puff premiered at the 2010 Hong Kong International Film Festival. It stars Miriam Yeung as Cherie who is a non-smoker and had to learn to smoke for the role. Shawn Yue is Jimmy the advertising executive. The film gives a vivid sense of how people live and talk in real life in Hong Kong. There's a cosmopolitan flavor with the language peppered with English and other languages and cultures. There is some foul language, that seems tame to American viewers and there's smoking in almost every scene. Nothing actually happens out side of the smoking, but the natural and authentic feel for the couple just starting out feels real and unforced.
(Review by reesa) 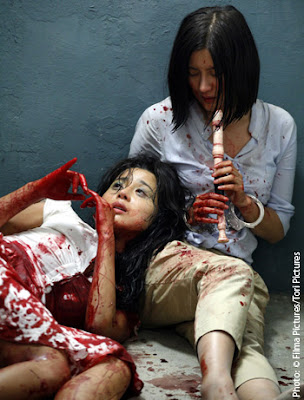 A woman unhappy in her job as a loan officer at a bank witnesses a woman getting beaten, but refuses to identify the perpetrators in a line up. She goes back to work and the woman whose load she loudly and unsympathetically refused is approved by another bank worker. She accuses the woman of trying to impress her male bosses. Later someone locks her in the bathroom at work and she ends up slapping the co-worker. Her boss tells her to take a vacation.

Hae Won (Ji Seong-won) goes to Moo-do Island where 15 years ago she visited her grandfather. She meets up with an old friend Bok-nam (Seo Yeong-hie) who has never left the remote underdeveloped location. Bok-nam had written many letters to Hae-won who ignored them. There are only sunbaked old women left on the island to farm and dive for oysters and they are excited to see someone from the city. The village leader doesn't think she will last a day there. The men chew on bozo leaf an addicting herb and outside of fixing roofs, don't really do anything else. Bok-nam is married with a 10 year old child Yoon Hee who doesn't go to school. As the only young woman on the island she is sexually used and abused by both her husband and his brother. Her husband feels free bringing prostitutes to the house who tells her that she should run away to Seoul where no one can find her. Hae Won watches with shock that everyone treats Bok-nam like a slave. But remains emotionally unmoved to the point of inertia to everything around her whether it be Seoul or Moodo. Bok-nam acts so happy that Hae-won is back remembering their childhood on the island. She hand washes Hae Won's pretty white dress lovingly like a precious prize. Tragedy strikes and it's the final blow to Bok-nam's psyche. Slowly the quiet life on the island starts to unveil the horrors that are about to erupt in a deadly explosion.

Bedevilled is a debut feature film by Jang Chul-soo from Secret Reunion screenwriter Choi Kwang-young. The contrasts from the opening scenes in the city, dirty, gritty full of danger to the sunshine drenched country side island are jarring, but it doesn't take long to realize that it too is just as soul-sapping. The build up to final act of carnage seems inevitable which may make one feel sympathetic to the perpetrator and repulsed at the same time. The dictionary meaning of Bedevilled is 1. to harass or torment 2. to throw into confusion 3. to possess, as with a devil. With this film it does all three.
(Review by reesa)

Email ThisBlogThis!Share to TwitterShare to FacebookShare to Pinterest
Labels: Affd reviews, Amigo, and Bedevilled, Love In A Puff