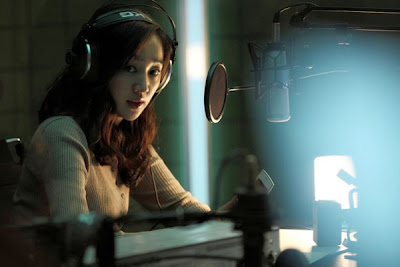 Ko Seon-Young is quitting her job as a popular radio show host of a late night program. She's moving to America with her mute daughter Eun-soon so she can have surgery that will cure her. During her last show she gets a call on her cell phone from Han Dong-soo who tells her that the lives of her sister, daughter and niece are in her hands. He tells he is in her apartment and that she must remain on the air if she wants to save her family.

Soo Ae plays Seon-young who has been doing the show for five years. She has a voice that sounds like a whisper in your ear. Soothing, gentle and melodious. She has her share of stalking fans. One adoring guy hangs anxiously outside her radio studio. The scary man with the knife is Han Dong-soo played with creepy coolness by Yoo Ji-tae. He calls her on her cell from her sister's phone so she would pick it up. He tells her not to inform the police or he will kill them. Of course she calls the police immediately and that doesn't go well. Meanwhile detectives are investigating another murder. They believe she is linked to a mentally ill serial killer who believes he is being heroic killing criminals. Seon-young realizes he's a total madman when she sees over her phone what he has done with the police and her family. He wants her to air music from a playlist he had sent to her producer. He has requested specific songs from the dates she played them. In the background of his video to video calls she can see her sister tied up in the background. She realizes she has to play his insidious game.

Kim Sang-Man directed this very tense and exciting story. It's a cat and mouse game as she is both terrified yet her brain is trying to figure a way to save her family. The scenes jump from the studio to the apartment. They watch each other from their cell phones. He checking that she remains at the station playing his music, she watching in horror as she murders her family members. Their conversations end up going over the air to her listening audience. Just listening to their low register voices talking smoothly over the radio while he teases her into a chase and the radio audience is mesmerized in fear. This is a sitting at the edge of your seat sort of movie as she fearlessly tries to save her daughter.

Soo Ae who was in the The Sword With No Name is perfect as the boxed in a corner Sun-young. She's smart, clever, and desperate while her male superiors continue to make wrong headed decisions endangering the situation. Yoo Ji-tae the bad guy in Oldboy is once more a killer with issues. It's never really quite clear why he's targeting the DJ and the family. At times it feels everything is out of control, how can this be resolved without total tragedy? That's the beauty of a well done film. Like a book you can't put down. It's worth overlooking some of the plot moves, this thriller is right up there with the best of the current Korean wave.
(Review by reesa)