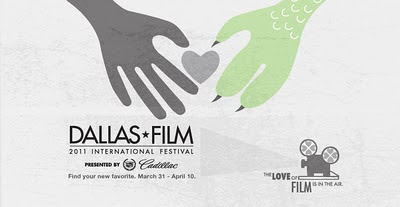 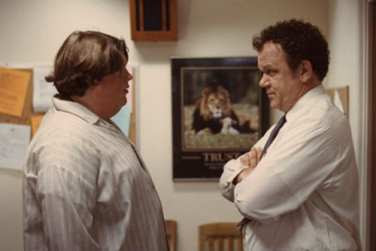 Over sized and depressed Terri is a 15 year old high school student who takes care of his bizarre ailing uncle James. He goes to school and everywhere else in his striped pajamas because “They're comfortable for me”. He has no friends and is the subject and ridicule by his classmates. He's pretty much accepted being ignored or bullied by those around him. The vice principal decides to take him under his wing in a special project for helping other misfit kids.

In his debut role Jacob Wysocki inhabits Terri with a shuffling downtrodden personality. It's like he has the weight of the world on his shoulders. He walks through the woods near his house to get to school. On the way he sets out traps outside for mice, then lays the bodies down in a line for the birds to come and eat. His uncle (Creed Bratton) talks to the Vice Principal Mr. Fitzgerald (John C. Reilly) because he thinks it's weird. In the administrative office Mr. Fitzgerald makes it a habit to yell at the students waiting for him just because it makes the secretary happy. He has created a little group of students to mentor who Terri later finds out are considered “special needs”. Reilly is perfect as the hapless Mr. Fitzgerald who understands these kids as he once was considered an outcast when he was a teen. He guides the kids with his own brand of acceptance.

Terri befriends a couple of others in his new group, a scrawny troubled punk Chat (Bridger Zadina) who pulls the hair out of his scalp and a disgraced popular girl with a reputation for being sexually active named Heather (Olivia Crocicchia). Terri defends Heather when she's branded that hateful word for loose young women. Grateful Heather says she will go out with Terri, and Chad shows up to mess with them. Taking some of his uncle's drugs they have some awkward game playing and revelations that will remain life altering for developing teenagers.

Independent director Azazel Jacobs has done a few small features that are basically unknown but also deal with approaching adulthood. Terri is one of those quiet films but with a slight sensibility like Rushmore or Napoleon Dynamite but without the silliness. It's kind of a sad film, without being a downer. Mostly due to the honesty in Wysocki's presence who besides being physically large has an honest acceptance of who he is which makes him more stable than anyone else around him. Outside of the mice thing that is. After a night with Heather he realizes on his own that he's just not ready for what she has to offer him. If only all teens could manage that wisdom.
(Review by reesa)