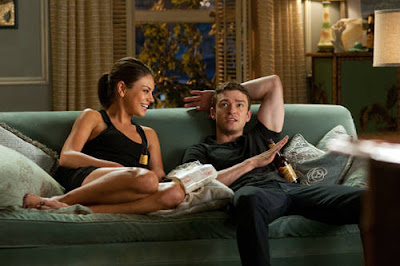 Jamie a successful headhunter in NYC and Dylan a successful web designer in LA just happen to break up with their respective boy friend (Adam Sandburg) and girlfriend (Emma Stone who would have been interchangeable as Jamie). She is being accused of being emotionally damaged and he is emotionally unavailable. Dylan gets a interview through Jamie's employment recruiter as an art director with GQ. They meet cute at the airport then she takes him for a personal tour of the Big Apple selling him on the relocation of his life. Of course if he signs the contract and stays for a year she gets a bonus.

Justin Timberlake and Mila Kunis play very attractive young singles who have great jobs, nice apartments, surrounded by friends and family that love them. What possible conflict could they possibly endure? Well, for some reason, they can't seem to keep a steady romantic relationship. After the first day of hanging out they continue their friendship after he starts his job keeping a funny upbeat banter developing into best friends. One night after a few drinks while commiserating on their pathetic love lives they decide to swear on her phones' Bible app to have sex with no emotional commitment and to stay friends. Feeling comfortable enough with each other without the usual foreplay and expectations they are able to have a really good time. Afterwards there's the awkwardness that's to be expected. And even though they tell each other to forget about it, then are right back into it. Her wild child mother Lorna (Patricia Clarkson) tells her it's like the 70's in there and calls her daughter is his “slam piece”. Pretty soon they are getting those “feelings” so they mutually decide it's time to start dating other people, even helping each other find the “one”. It gets more complicated when Dylan brings Jamie back to California for a holiday weekend where his family can see that they are perfect together.

Easy A director Will Gluck with a multiple of screenwriters have made a rom com that's supposed to be more adult via language and nudity. The characters make fun of the the whole rom com genre even watching cliché filled fake movies with Jason Segel and Rashida Jones. There's the self aware nods when at one point Lorna and Jamie are talking with the movie “Bob, Ted, Carol and Alice” a 60's film about free love. Woody Harrelson practically steals his scenes as the gay sports editor of GQ who assumes Dylan is gay too because he's an art director. Richard Jenkins as Dylan dementia suffering father is the only serious bit that helps progress the story during the last act. Jenna Elfman plays Dylan's older sister who helps her brother see his situation a little clearer. Only the flash mob dancing dates the film as being so five minutes ago. It's like Hollywood finally making a movie about free love years after the fact. Still the two leads are cute together, it's has some amusing moments, but parents be warned this is not for kids.
(Review by reesa)

Email ThisBlogThis!Share to TwitterShare to FacebookShare to Pinterest
Labels: Friends With Benefits review