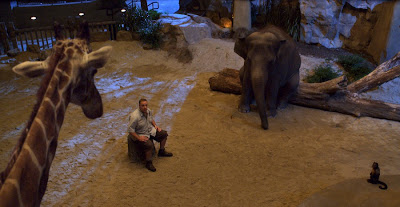 Griffin Keyes takes his girlfriend for a horse ride on the beach, and surprises her with a note in a bottle asking her to marry him complete with Mariachi band. She heartlessly rejects his proposal. Five years later he's still smarting from his failed love life. Directed by Frank Coraci of the Wedding Singer with a handful of screenwriters including Kevin James, Zookeeper tells the story of of a good hearted zookeeper who learns about love and life from the animals.

Kevin James plays the conscientious Lead Zookeeper in Boston that looks nothing like the real Franklin Zoo. The animals enjoy the personal care that Griffin gives to each of them. Rosario Dawson plays the zoo vet Kate who loves her job with the animals as much as Griffin. Donnie Wahlberg is Shane the zoo attendant with a mean streak and Ken Jeong plays his usual smarmy character as Venom who is in charge of the reptiles. Griffin's brother is getting married and the wife to be just happens to be friends with Griffin's ex Stephanie (Leslie Bibb). Seeing her again gets him all nervous and inarticulate. His brother Dave (Nat Faxon) wants him to quit the zoo and work at his dealership so that he will have something to offer Stephanie. Frustrated he starts to voice that maybe he should leave his job at the zoo. The animals are afraid they will lose Griffin so they break their “code of silence” to advise him on how to win her back. Various animals talking and getting out of their cages offers some moments of trepidation for Griffin, but he starts to follow their advise like bellowing like bears, marking their territory like wolves, and making them jealous as advised by the lioness. On top of that he makes friends with the sullen Bernie the Gorilla (Nick Nolte) who wants to enjoy the whole world rather than his stone enclosure. Griffin grows confident in the advise of his new friends but is winning Stephanie what he really wants?

It's kind of fun trying to tell which celebrity voice is attached to the animals. There's Adam Sandler, Sylvester Stallone, Cher, Jud Apatow, John Favreau, Faizone Love, Maya Rudolph, and Don Rickles. The best part of the movie is when Griffin takes Bernie out to TGIF Friday's (product placement much?) by just having him wear a polo shirt as if he's in costume. There could have been a whole other movie made just on Griffin and Bernie's wild adventures. The animals look computer generated basically just standing around with their mouths moving not really interacting with each other. There's a whole jealous rivalry story going on with Stephanie ex-boyfriend Gale (Joe Rogan) that seems to have been thrown in to make the movie longer. It's an amusing summer movie for kids, but would probably make a better Red Box rental in a couple months.
(Review by reesa)

Email ThisBlogThis!Share to TwitterShare to FacebookShare to Pinterest
Labels: Zookeeper