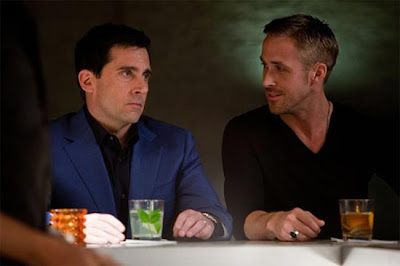 Cal and Emily Weaver are you normal suburban couple. They have kids, a nice house, successful middle class jobs. One night when they are out having dinner, Emily blurts out that she wants a divorce. She confesses she had an affair with David Lindhagen a coworker at the accounting agency. After 25 years of marriage and without a clue this was coming, Cal is stunned mute. Emily is driving home verbally justifying herself, when Cal tells her to stop talking or he's going to get out of the car. She continues and he opens the door diving out of the moving vehicle.

Cal moves out and gets an apartment where his kids can spend time with him. He also starts going to a bar where he grouses loudly to everyone while wallowing in his self pity. He watches a good looking guy pick up women with ease. The smooth talker uses the same lines which women fall for each and every time. Cal is both offended and fascinated. After a few nights of complaining Jacob (Ryan Gosling) decides to take Cal under his wing and rehab him for his new lifestyle as a single man. That means new clothes (you are better than the Gap!), haircuts and confidence. Jacob teaches him all the lines, and after getting his feet wet a reborn Cal becomes a player. Even Emily (Julianne Moore) is impressed at how well he looks.

Jacob meets a beautiful Hanna (Emma Stone) at the bar and for the first time, someone is actually calling him on his charm. Intrigued by the one that got away he's completely surprised when she comes in one night and kisses him after her sort of boyfriend Richard (Josh Groban) offers her a job instead of marriage.

Cal's 13 year old son Robbie (Jonah Bobo) has a crush on his 17 year old baby sitter Jessie (Analeigh Tipton) and she in turn has a crush on his dad. Awkward. But Robbie believes that once you find your soulmate you fight for her. Advise that he imparts to his father to try and get his marriage back.

After the past few ranchy comedies it's nice to find a grownup movie. Directors Glenn Ficarra and John Requa with writer Dan Fogleman (Cars, Bolt) offer up a funny with a heart story of people who have lost sight of what is important in their lives. Steve Carrell plays Cal with an everyman grace. For once he's not annoying. He's a good guy, great father, and a bit down trodden with his wife's betrayal. Julianne Moore is as beautiful as ever. Her Emily is going through a midlife crisis. Her reaction to the boredom of her marriage was to be influenced by Kevin Bacon's David. Not a bad sort, but he is after all sleeping with a married woman. Ryan Gosling adds another notch in his career by handling comedy and doing it flawlessly. He's Cal's Miyagi. And Emma Stone is the best thing happening in movies now. Their scenes together light up the screen. Good summer movie worth the popcorn.
(Review by reesa)