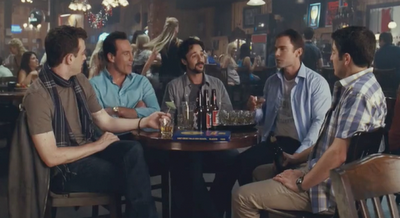 American Reunion is a completely derivative rehash of a dying series, filled with enough ridiculous clichés of other movies in this genre that you could fit them up Stifler's mom, but for some reason, I still had a pretty good time. I think the biggest reasons for this are the characters. Jim, Oz, Stifler, and the whole gang are back in this film and many of them are funnier than they've ever been. A scene where Stifler (Sean William Scott) gets back at a couple teenagers for stealing some girls tops at the beach is flat out hilarious.

I know it might be harsh to say this, but I think these actors were all so perfectly cast for these angst filled permanent teenager roles to begin with that we were kidding ourselves to believe that they were ever going to be much of anything else. Outside of Sean William Scott, every actor in this film must have been dying to get a role in a film some one will actually watch. Jason Biggs (Jim), Mena Suvari (Heather), Tara Reid (Oz), and Chris Klein (Oz) haven't been in a decent film in so long that I'd be surprised if anyone even knew they were working, while Alyson Hannigan (Michelle) literally hasn't done anything since 2006's awful Date Movie. That's a 6 year hiatus. Wow! She was dead in the water. Well, luckily Universal Studios decided that they could make a lot of money off yet another sequel to this cash cow and now these starving actors have work. Hurray!

The basic story in this, getting the band back together plot line, is that everybody is coming back to their old town for their 13 year class reunion and, of course, they all have issues. These issues range from Oz being a sportscaster who's unhappy with his slutty girlfriend, Kevin being a house wife (husband) who's unhappy he's always forced to watch Gossip Girl, and the main plot is that Jim and Michelle are unhappy because they don't have sex. Many of these plot lines lead to sweet, funny, or satisfying conclusions, but sadly the main plot involving Jim leaves much to desire. Basically, we are treated to a sexy bimbo next door that Jim used to babysit come after his Johnson like a stalker that he must try to avoid in one scene after another. It's pretty lame and the film suffers because of it.

However, I doubt many people will seriously give a damn how stupid any of it is and luckily the final act is pretty entertaining. All anyone is going to care about is whether they laughed and if they enjoyed visiting they're old friends. I don't know if this is a good enough reason to charge people $8 for a trip down memory lane, but it almost is.

Review by:
Nathan Ligon
Thank You for Watching

Posted by Dallas Movie Screenings at 7:01 AM