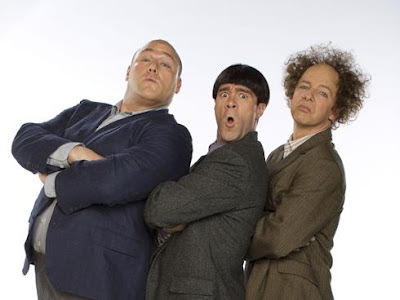 The Three Stooges started out as a vaudeville act back in the early mid 20th century with their trademark physical slapstick in the very literal sense of a slap. Larry, Moe and Curly Joe spent years in various forms (Shemp and Curly Joe) doing episodic short films. Their extreme violence towards each other was silly and attracted a mostly young male audience. It seemed it would be a natural be for the Farrelly Brothers who subjected the world to Dumb and Dumber and What About Mary humor.

The best thing about this updated version of the Three Stooges is the characterisations by the three actors playing Larry (Sean Hayes), Moe (Chris Diamantopoulos) and Curly (Will Sasso). Their spot on imitations however only go so far in making a full length film interesting enough to stay awake. The main plot of the film is about the brothers trying to save the orphanage where they have lived most of their lives. Raised by the nuns (Jane Lynch, Larry David, yes, dressed as a nun, and Jennifer Hudson) who like most characters in all Stooge's films play their roles straight. The brothers are inseparable and drive the sisters to distraction especially Larry David's Sister Mary-Mengele. Even when a couple try to adopt Moe, he wants to bring along his brothers. So they take him back and another young boy is adopted.

When the boys grow up, they attempt all sorts of schemes to raise $830,000 to save their home. The adopted boy Teddy (Kirby Heyborne), who they meet later in life had joined his father's law firm. Teddy's wife (Sofía Vergara) and his best friend Mac (Craig Bierko) try to hire the nitwits to kill their unsuspecting friend thinking they would do anything for the money. Their various schemes to raise cash takes up the middle part of the movie like having a salmon farm on a golf course. Also along the way the brothers split up and Moe ends up on the Jersey Shore reality TV show beating up the cast (probably the only satisfying moments in the film).

If you are fans of the Stooges then this movie is for you. But the idea of 3 grown men slapping each other around as a way of showing affection to each other isn't exactly high brow entertainment. There's obviously an audience for people hitting each other with hammers. After all the Stooges are an icon and part of everyone's Saturday morning television memories. There's plenty of “nyuk nyuk's” , eye pokes, and that snappy finger thing to do a proper homage. The movie is thankfully only 92 minutes long because a little of this Stooge is more than enough. Stay for the disclaimer at the end of the movie advising kids not to do this stuff at home. Like that worked for the kids watching Jackass.
(Review by reesa)

Email ThisBlogThis!Share to TwitterShare to FacebookShare to Pinterest
Labels: The Three Stooges review