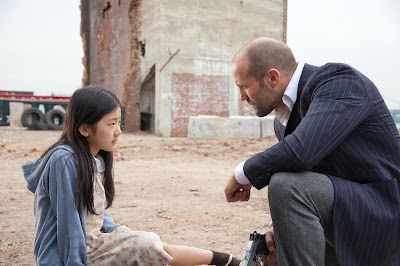 Written and directed by Boaz Yakin who wrote Prince of Persia this unapologetic action flick with badder than bad@ss Jason Statham who battles the Chinese, Russian and New York City Police force to keep a young girl “safe”. Bodies pile up like the garbage during a citywide strike and Statham uses the most inventive methods of doing in the bad guys. Pay no attention to the collateral damage happening to innocent bystanders. This only justifies Statham's payback.

Luke Wright has been reduced to doing cage fights in which he was supposed to do a dive in the second round. Unfortunately the opponent is knocked into a coma. The promoter is only worried about the Russian gangster that lost big money and is looking to take it out on Luke. He rushes home to get his wife and kid to safety, but the Russian gangster's sadistic son got there first. Since Luke doesn't have any more family to take out their revenge they let him go with a warning that they are watching him always. That he can't make friends, or stay anywhere permanent or else. Even after a year of being homeless he gives a fellow bum his shoes, and the next day he's dead. Luke is in survivor mode, but is feeling like maybe it's not worth it afterall.

That is until he sees this 10 year old Chinese girl in the subway station, alone, looking like someone is after her. Some Russians come in acting suspicious and definitely on her tail. A sense of righteousness over comes his depression and soon he is following them too. The little girl Mei (Catherine Chan) was kidnapped by gangsters in China is force to work for them when they threatened to kill her mother. Mei is a math prodigy with a photographic memory. The Chinese leader Han Jiao (James Hong) doesn't trust computers because they are easily hacked. Mei is able to keep all his records and transactions in her head. He send her with an assigned adopted father Quan Chang (Reggie Lee) who is handling operations in New York. A big job is brewing via a long set of numbers committed to Mei's memory and everyone wants it. The Russians kidnap her, the Chinese call in the dirty cops, but the Russians are outbidding them, soon the cops want whatever the girl has, so soon there is no where safe for her or for Luke who has become her protector.

This is not the kind of movie to attend if you want an in depth storyline or emotional satisfaction. Statham leaden quips, the action set pieces, the pointless never ending body count is typical of the genre that he's developed into his own category. The story while highly improbable is just enough to keep one entertained while waiting for more mayhem. You just know that Luke Wright is just not another cage fighter/garbage man/ex-cop. There's some character building thrown in to show he's got a sense of right and wrong, and he's not afraid to “Wright” those wrongs. Worth the popcorn.
(Review by reesa)