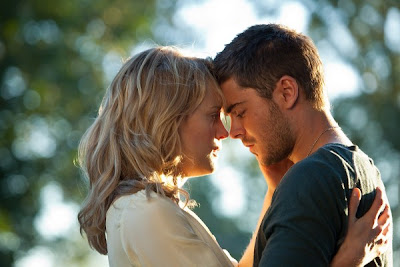 You are going to hear a lot from critics, who have the displeasure of sitting through the new Nicholas Sparks romance The Lucky One, that if you like previous Sparks adaptation than you are likely to enjoy this one. I think this may be the case to an extent, but not entirely true. Why? Well, I really liked The Notebook a lot and I absolutely hated this film. That's right. I didn't just have some slight issues with it. I found it painful to sit through.

I'll get into the problems after I force myself to explain the plot. In this film, a young Marine Sergeant, in either Iraq or Afghanistan, named Logan (Zac Efron performing his role with a series of blank stares) picks up a picture of a blonde girl on the battlefield and manages to not blow up because of it. So, he comes home and walks the country to find the girl. Luckily, the film finds her for him in about 2 minutes and we fall into a typical love story about a guy who starts a relationship with a lie that the film is just waiting to for us to......well, you know what happens. Anyways, the girls name is Beth (played by an over the top or under the bottom Taylor Schilling) and she has some serious issues, involving her son, to deal with before she can commit to Logan and get surprised by the 3rd act cliché. Well, they could be considered serious if you could believe them.

This leads is to one of the many issue with this film. You just can't believe any of it. It feels like the story was just thrown into a romantic movie jar, shuffled around a bit, pulled out, and placed into predictable order. Everything from the way Logan goes from bouts of serious PTSD for 5 seconds to never have it be an issue again, the way that the local deputy ex husband shows up at all the right moments for convenient conflict, the way Logan literally finds this woman in a credit sequence while walking the country (because finding a random person in the whole USA is easy), and don't get me started on the awful scene where they meet, but conveniently she interrupts him every time he says what he walked thousands of miles to say until he turns into a mindless drone. That scene was so fake that the actors should have stamped the word "acting" to their forehead.

Sadly, all that is only a small bit of the problem. This movie also suffers from pacing issues galore. We rush through an opening that is literally take place over years and involves pretty important, empathetic information. We drag the center of the film out to such lengths that I can hardly tell you what actually happened of much importance. Then, in the end, we rush to the climax. Well, that is until we get to the slow motion part of the climax that everyone will see coming a mile away.

The saddest part of all of this is the waste of Efron's talent. He is a good actor (see Me and Orson Welles) who can command a narrative. However, after Charlie St. Cloud and this crap, he is sadly digging his own grave with legitimate filmmakers. I hope he can dig his way out soon.


Nathan Ligon
Thank You For Watching

Email ThisBlogThis!Share to TwitterShare to FacebookShare to Pinterest
Labels: Nathan Ligon, Thank You For Watching, The Lucky One review