The Kid with a Bike 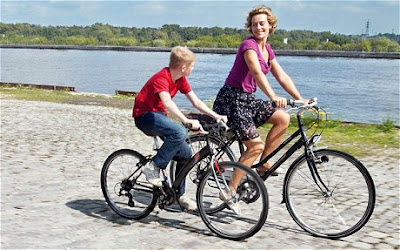 Belgian brothers Jean-Pierre and Luc Darenne wrote and directed the film The Kid with a Bike that won the Grand Prix award at the 2011 Cannes Film Festival. Thomas Doret who plays the 11 year old Cyril Catoul is brilliant in a very tough role of a young boy abandoned by his father and placed in a state country home for children. He's sullen, angry, unable to express his fear and heartbreak. The subject matter may seem like a major bummer for a movie but Cyril's internal struggle and how it effects the people around him is what makes this film unique.

Cyril is acting out to the counselors at the home. His father left him there a month ago and at the time promised to come get him afterwards. Cyril attempts to climb the fence and eventually one day he escapes and manages to get back to his apartment. The counselors chase him around until he hides at a medical office latching on to a woman in the waiting room. She asks him to ease his grip but does not protest. Perhaps she feels for his belief that his absent dad would leave his bike there for him. After they show him the empty apartment, Cyril is still not ready to believe that his father is not coming back but he's temporarily eased when the lady at the doctor's office retrieves his bike.

Samantha (Cécile de France) owns a hair salon. In a random act of kindness she says yes to Cyril when he asks if she will let him come to stay during the weekends. Their connection with each other is almost primal in it's need. Something about the lost boy touches Samantha's heart as she helps him track down his father (Jérémie Renier) a spineless immature adult who tells her not to bring him back. Samantha makes him tell Cyril himself. They boy doesn't ask for sympathy, doesn't whine or bemoan his plight. He falls prey to the local dealer who entices him with games and fixes his bike in order to seduce him into doing crimes for him. Head strong Cyril even battles Samantha who is doing everything she can to keep him safe. But he's just too out of control even for himself.

Doret with his pinched watchful face lives instinctively. He's a boy with few words and does not smile easily. He rides his bike with a fierceness as if he's trying to out distance the pain chasing him down. As his guardian Cécile de France's Samantha is a no nonsense woman who treats the boy with respect even honestly facing her choice of Cyril over her boyfriend when push comes to shove. Although it's hard to watch Cyril getting beaten down by life, it's also mesmerizing to watch as he slowly inevitably learns how to survive and accept what he's given. If this movie was made in the US it would probably have a lot more violence and a big named star emoting as the mother figure. This under rated movie doesn't beat you on the head, it's quiet, sensitive and human.
(Review by reesa)

Email ThisBlogThis!Share to TwitterShare to FacebookShare to Pinterest
Labels: The Kid with a Bike review