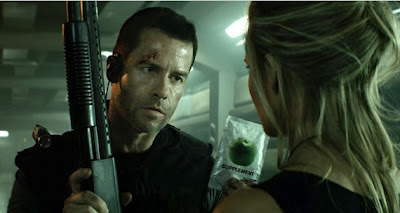 The poster for Lockout proclaims that it's from the producers of “Taken”, which is probably to ensure you that their new feature has some rip snorting action with guns and machismo. Luc Besson produced and co-wrote his story idea with co-directors Stephen St. Leger and James Mather which they filmed in Siberia. Space station jails are nothing new in films if you ever perused the straight to video section at Blockbuster. What keeps this film afloat is Guy Pearce as the snarky ex-CIA agent who is being set up then sent up to space to save the president's daughter. It's 2079 for this futuristic dark action thriller that tries too hard.

Guy Pearce gained weight and put on muscle for this role as the film makers thought he was too skinny to play Snow a ex government agent who is accused of killing his partner in an espionage scheme. Peter Stormare plays Langral the agent in charge of getting him to confess having seen him with his own eyes what he thinks as Snow shooting his partner. Lennie James is Shaw who plays good cop to Langrals bad cop by telling Snow that he doesn't think he did it. But Langral's eye witness account gets Snow sentenced to 30 years to MS One a private super jail in space where prisoners are put in a sleep stasis for their crimes.

Emilie Warnock (Lost's Maggie Grace) is the president's daughter who is doing a humanitarian visit to the station to investigate the conditions of the prison and the reports that being is stasis causes long term effects like brain damage and psychosis. She interviews one of the really bad prisoners who is brought out of deep sleep. Hydell (Joseph Gilgun) a tattooed one eyed psychopath manages to get the gun from the guard and somehow release all the prisoners. (don't think too hard and just go with it). Alex (Vincent Regan) takes control of the situation and tries to rein in his crazy as a loon brother who just wants to kill everyone. The breakout is quickly discovered by those on earth and the easy solution would be nuke the site from orbit. But with Emilie on the station, they decide the only way to save her is by sending in Snow. Snow of course is not happy with this plan, but Shaw lets him know secretly that Mace (Tim Plester) is on the station and he's the only one who can prove that Snow is innocent because he hid the briefcase. This give Snow the incentive to go save the girl.

There's animated car chases in this in, there's hair dye that's made of motor oil, toilet water and cigarette ash, and there's parachute jump from space. You really just have to suspend reality for bit. Pearce is satisfying as the irreverent agent who annoys everyone especially the president's daughter. Grace is a bit wooden at times, but volley's well with Pearce as their characters clash. She wants him to save the rest of the crew, he just wants to get her off the station and find Mace. An OK Saturday night date movie, but a better rental.
(Review by reesa)