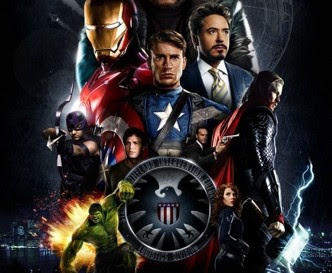 First of all, Joss Whedon rocks. Firefly, Serenity, Buffy, Dr. Horrible and the recent Cabin in the Woods, all have huge cult followings. His snarky dialogue with a sharp and unique pop culture references is often funny and insightful. Adding that touch to a contentious bunch of divergent superheroes is what makes this film so kick@ss. As the individual films for each of The Avengers (except for the Black Widow and Hawkeye who don't have a stand alone feature) proved that they could be overwrought excesses in FX, the new Avengers film reins it in, giving each of the team members a chance to shine. Directed and written with Zac Penn (The Incredible Hulk and X-Men: The Last Stand) the story may be hard for the uninitiated to the Avenger world to understand the ties that bind and the history of each of the Superheroes. It's probably a good idea to at least watch Thor and Captain America to get the gist of what's going on. The Tasseract energy cube is straight out of the comics that was originally created by Stan Lee and Jack Kirby back in 1963. The plot device is only there to unite the characters and ultimately save the world.

Loki (Tom Hiddleston), the exiled god of Asgard and adopted brother of thunder god Thor was last seen impersonating Dr. Erik Selvig who was brought in by S.H.I.E.L.D's Nick Fury (Samuel L. Jackson looking bad@ss cool with eye patch) to work on the Tasseract technology. Loki's plan is to open a worm hole using the Tasseract to attack earth with the help of the alien race the Chitauri. Fury activated the Avengers Initiative gathering Natasha Romanoff (Scarlett Johannson), a spy also known as The Black Widow, Dr. Bruce Banner (Mark Ruffalo) who refers to his alter ego The Hulk as “that other guy”, Tony Stark's Ironman (Robert Downey Jr.), and the recently thawed Captain America. Thor (Chris Hemsworth) shows up later to bring Loki back to justice on Asgard. Loki having received a powered staff from the Chitauri as a Guardian uses it to subjugate Dr. Selvig (Stellan Skarsgård) and later Hawkeye (Jeremy Renner) aka Clint Barton to use for his own evil purpose. He then attacks the flying aircraft carrier that is the control center for the Avenger's operation after he's captured in put in a holding area designed for containing The Hulk.

Gathering a bunch of self righteous do gooders in one spot is fraught with controversy. Each is highly opinionated and somewhat competitive of their abilities. There's some in house battles with Ironman and Thor, Thor and Captain America, The Hulk and everyone. Everyone argues, and of course Ironman gets the best lines. The skill levels are impressive especially with the new characters of Hawkeye and the Black Widow the only ones who don't have superhero strength, but have extraordinary abilities. There's also a new character of Fury's assistant S.H.I.E.L.D agent Maria Hill (Cobie Smulders). And returning character Agent Philip Coulson (Clark Gregg) who is a Captain America fanboy. Somehow Fury has to find a way of getting his team to work together.

Each of the action set pieces are designed to shock and amaze. Bigger, better and badder than Transformers if only because the Avengers are easier to relate and care about than CGI robots. The performances are spot on and true to the established characters in their previous movies. Johannson breaks the mold of the spandex, high heeled wonder woman by being tough, confident and competent. We don't know much about Hawkeye although his exploding arrows that always hit their mark is a great addition to the lineup. Ruffalo's Banner makes the best Hulk ever. Whedon was wise to underplay the Hulk's presence in the film. Lets just say his impact is “smashing”. There are so many great moments that leave the audience cheering. It's probably safe to say that this is the best superhero movie to date. Of course there's the retooled Spiderman and Batman Rising still waiting in the lineup. For now, The Avengers will be one to keep re-watching until something else comes along.
(Review by reesa)

Email ThisBlogThis!Share to TwitterShare to FacebookShare to Pinterest
Labels: The Avengers review