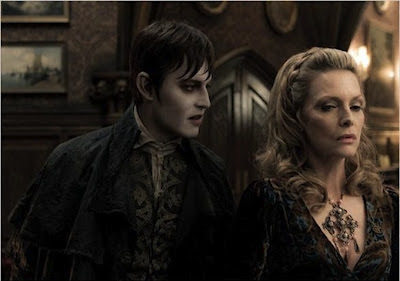 Heading into this movie, I wasn’t exactly expecting a masterpiece, but I WAS expecting to enjoy yet another amazing piece of film by Tim Burton and Johnny Depp. Before I go any further, let me start off with saying that I LOVE the combination of Tim Burton and Johnny Depp. It’s like dark chocolate; you get so much enjoyment out of it, but you have to have a certain taste for it to be able to appreciate it. (Alright, now that I’ve stated that, here goes the rest of the review.) I did not like it. Actually, if I had known how much I wouldn’t like it, I would have waited for it to come out on DVD so I could just rent it. (Yeah, it was that bad) And not that it was necessarily BAD, but on a scale of 1 to Tim Burton/Johnny Depp it was a 4. It didn’t meet up to any of my expectations. I geared up to watch something funny, but rarely did I laugh. The movie was also a lot darker than I was ready for. It was painted with a lot of killing and blood, as well as an overhaul of sexual innuendos. I am not familiar to the original series that this movie was based off of, and if I’m building my interests based on this movie, I’m not sure I really want to. Sure, visually, it was great! The movie had that certain “look” and “feel” that always seems to carry over from every single movie Burton has made. The story of it all seemed lacking though. There were just a few too many holes that never really got filled, and a couple of redundant shots of scenery that you expected to play an important role later on in the movie, but never did; so it was pointless. However, I WAS blown away at how well Chloe Grace Moretz embraced her inner hippie. She really seemed to connect to the roll, and it almost seemed completely natural for her. But, besides her, everybody else’s performances seemed quite mediocre. (Yes, even the great Johnny himself) The story never actually developed any characters either; rather, they appeared as if they were thought up quite randomly to fit the cinematography that Burton had envisioned in his head. For example, (I’ll go back to Moretz’s character), starting from the very beginning she would just have random fits of rage that didn’t make sense what-so-ever. If there was supposed to be an added flare for the dramatic by doing this, it failed to do it. Another prime example of poor character development was, (WARNING: SPOILER ALERT), there was this one ghost that one of the girls could see, and two times she appeared, but never did she fit into the end. She was there, but you have no idea why. All in all, Dark Shadows is a waste of 10 bucks. Unless you’re some die hard Tim Burton and/or Johnny Depp fan who absolutely can’t stand to wait a couple months for it to make its debut on DVD, then I would suggest sitting back, relaxing, and watching this one bomb at the box office.

Posted by Dallas Movie Screenings at 1:16 AM