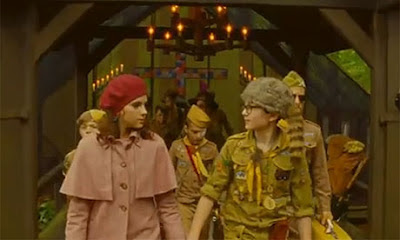 Director Wes Anderson movies seem to have an occurring theme of a dysfunctional family dynamic as in Rushmore, The Life Aquatic with Steve Zissou, The Royal Tenenbaums and Fantastic Mr. Fox. In his newest film which he wrote with Roman Coppola he turns the eye to a couple of tweens living on the island of New Penzance during 1965 right before a major meteorological catastrophe. Anderson's quirky take on a scout troop, New England island life and a sense of innocence before kids were plugged in and tuned out. The music, costumes and art direction gives this film an unusual charm that will delight in it's optimistic hopefulness.

Twelve year olds Sam (Jared Gilman) and Suzy (Kara Hayward) met during a church performance of Noah's Ark. They start to write to each other eventually deciding to meet each other so they could be together. Sam is a member of the Khaki Scout Troop and escapes from his pup tent. Suzy who watches the world from her binoculars packs her suitcase with her brother's record player, fantasy books and her cat. They hike across the island to a cove where they set up camp they call Moonrise Kingdom. There they talk, play, and discover young love (no sex) with some innocent kissing. Meanwhile Scout Master Ward (Edward Norton) reports his missing trooper to police Captain Sharp (Bruce Willis). He calls Sam's foster family who say they don't want him to come back. Sharp must report this to Social Services (Tilda Swinton) who plans to come to the island to take him in custody and to the shock of Sharp and Ward he will be remanded to an orphanage. Suzy's lawyer parents Laura and Walt Bishop (Frances McDormand and Bill Murray) are upset to learn that their daughter has run off with Sam. Everyone, including the scout troop (or the beige people as Walt calls them) go in search of the young lovers. Jason Swartzman, another Anderson favorite, shows up later in the story as the supply Scout master who aids the young kids in their quest to be together.

What seems straight forward as far as plot is presented in a diorama of color and style that's reminiscent of a low budget indie film of that time period, including the palmer method of handwriting font that's on the movie poster. The clothing, doll house type of houses, trailers and pup tents echo a simpler time and space. Its the music by ---- that pulls the whole film together. Granted this movie probably won't be everyone's cup of tea, but if you loved Anderson's previous work, this ranks up there with one of the best.
(Review by reesa)