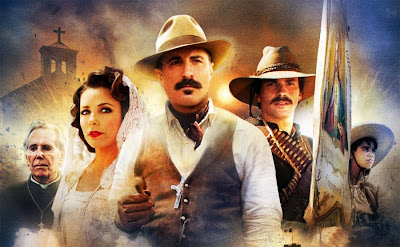 A few years after the Mexican revolution, President Plutarco Calles felt that foreign influence of the Catholic Church was undermining the interests of the people of Mexico. Laws were created to keep priests from wearing their vestments outside of the church and all foreign priests had to leave Mexico. A peaceful protest group was formed to bring back religious freedom. But Calles' responded with even harsher restrictions to the point where even Mass services was banned. Before long the Federal Army was called in and priests were killed and churches destroyed. This was the beginning of the Cristero War that ravaged the country from 1926-1929.

This is a director Dean Wright's feature debut working from a script by Michael Love about a little known piece of North American history. The movie tries to cover from the early days of conflict by showing the benevolent priests dying for their faith. Peter O'Toole has a small role at the beginning introducing José Luis Sánchez del Rio (Mauricio Kuri) the troubled god child of the town's mayor. He impresses O'Toole's Father Christopher enough to begin training as an alter boy. After the war reaches their church, Jose and his friend decide to join the Cristerors who are hiding in the canyons while running guerrilla attacks. The loose outfit consists of a warrior priest and assorted rebels who don't answer to anyone. The League who is running the protest in the city want to hire a former general Enrique Gorostieta Velarde (Andy Garcia)from the recent revolution who as his devout wife Tulitaa (Eva Langoria) says is an atheist. Although the general doesn't believe in The League's cause, he does believe in freedom that they had fought for during the revolution. He organizes the rag tag group into an effective army, taking the young Jose under his wing as a surrogate son. Mean while the US oil interests brings in a new Mexican ambassador (Bruce Greenwood) who tries to negotiate peace with the Cristeros, Calles and the Vatican bishops. He's appalled by the sight of hanging bodies from the telegraph polls along the train route. But President Calles wants weapons in exchange to subdue the insurgents which he receives because the US wants to protect their financial interests in Mexico.

As interesting as this unknown tale of Mexican history can be, the movie itself plays like a television mini-series. Period costumes and set decoration all filmed in a sort of sepia tones is like a trip to Olveria Street in Los Angeles. The faces of well known actors parade across the screen with and without accents telling small bits of information that is sometimes confusing and unnecessary. The story of Jose who becomes a Christ figure and martyr will satisfy the religious contingent who is the basic audience of this film which will play well on the church circuit. No one really comes out a hero in this woeful tale of human rights infractions mired in political maneuvering. But the Catholic Church awarded some of the Cristero participants with beautification and canonizations to sainthoods.
(Review by reesa)

Email ThisBlogThis!Share to TwitterShare to FacebookShare to Pinterest
Labels: For Greater Glory review