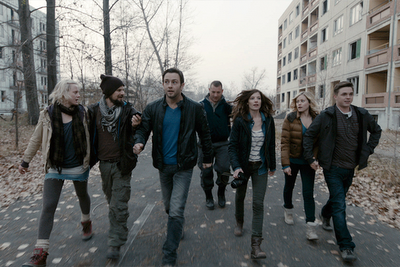 The film’s star performer is its amazing set and setting. Chernobyl Diaries has the ability to frighten the viewer a satisfactory number of times with without a high film budget, special effects or a big name cast, just like Paranormal Activity did. There are few things more frightening than being stranded out in nature, in an unfamiliar place facing unfamiliar threats on your own without resources.

The film introduces the viewer to six pretty young adults (an almost engaged couple, male relative, single girl, and a foreign couple who joins up with the tour) four of who decide to skip a planned trip to Moscow to experience some “extreme tourism”. Led by their guide Uri, a ripped ex-Special Services soldier with the requisite accent, they board a “sketchy at best” van, to tour Prypiat, a residential community for the 50,000 reactor workers and family members that had been abandoned right after the 1986 Chernobyl nuclear reactor disaster. They are turned away at the gate yet manage to slip in the back way via their guide. (of course)

They wander through and explore the surreal deserted apartments, recreation facilities, woods and grounds, experience a few laughs and scares and encounter a few things alive and dead. But the overall uneasiness grows just by the impending looks of dread and doom on Uri’s face and the fact that he needs to pull out his gun and go off into the woods alone in pursuit of strange noises, after the van predictably refuses to start, and it is discovered that wiring had been destroyed. And so night falls and things start moving in.

The first frights are of the familiar kind expected out in the wild but it soon becomes clear that there is something else there. Something hiding or being hidden from them is trying to pick them off one by one. But the most visually stimulating and claustrophobic scenes are when the party make their way in, out, over, around, through and past the maze of rooms and tunnels within the complex. I was reminded of the many haunted houses I have visited over the years and if that system of scare tactics isn’t broke there is no need to fix it. Not knowing what is around the corner or waiting for you channels Alien in its methods and is used to put you on the edge of your seat. Parts of the film appear in the form of “footage” that was recorded by someone no longer around yet viewed in real time as the events had unfolded, a la Blair Witch.

Creak, Crash, Bang. The unique setting remains the star. Splash. Ripple. Waters that hold unknown, hinted-on life that is familiar yet grotesquely changed by the exposure to radiation over time. Howl, Moan, Cry. Woods that hold abandoned and ravenous wild animals exposed over time to the remaining radiation. Filmed mainly in Eastern European at locales that fill in for the city of Prypiat, which is a real tourist site, the movie does feel believable. Tunnels underneath Belgrade were used to help provide the appropriate suffocating feeling that they are being pursued and surrounded by something other worldly.

While the cast seems chosen for eye and personality appeal, Dimitri Diatchenko is a real presence in the first part of the film, as he clearly conveys that there is possibly more to this tour than in the brochure with just his eyes and facial expressions. We know we should be scare because he is too. I found the ending to be a bit disappointing but it is hard to imagine any other way TO end such a tale.