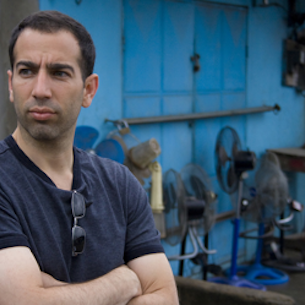 First time film makers Ami Horowitz and Matthew Groff take on the United Nations in a surprising and amusing Michael Moore style documentary. The UN was created after WWII the UN was created to fight oppression, ensure global security and protect human rights taken after the US constitution. Today it helps fight starvation and disease. But lately the UN has been embroiled in money laundering, bribery and making a mockery of human rights.

The film opens with Horowitz personally visiting the UN, wandering freely around the empty corridors, General Assembly Hall, a visibly marked restricted security area, even answers a phone, and no one is around. He relays a story of how a guard killed himself while sitting next to a guard who was sound asleep. This sets the stage for the story of bureaucratic ineptitude that is today's UN.

The film shot in 2008 – 2009 explores how the UN has drifted from it's original purpose. In 1946 the UN created a human rights standard. But today countries that have serious questions on their own human rights problems like Syria, Libya, and Iran are put on the councils. The 2009 conference on racism and human rights at the UN the President of Iran who believed the holocaust was a myth and whose country hangs gay people was the keynote speaker. There are various interviews with involved parties and archived footage the film explores the worst of the violations, scandals and abuse that has become a quagmire of corruption.

Horowitz a former investment banker travels to African nation of Cote d'Ivoire where he reports on a little known incident where French UN Peacekeepers fired on peaceful protesters. He interviews a former peacekeeper who relays stories of rampant sexual abuse of the local women, drug trafficking, and no accountability or discipline. He also interviews Nobel laureate Jody Williams who reported on the Darfur holocaust to the UN Human Rights Commission but was blocked by the very commission who sent her in the first place. Despite some serious and depressing exploration, Horowitz's Borat style adventures also include sneaking onto a conference podium telling the audience they should be embarrassed and ashamed. Or when he asks the Sudan UN ambassador why Sudan stones gays after the first offense but lesbians only after the fourth. To which he replied that if she is married she will be stoned immediately.

In most people's minds the UN has become a pop culture reference as backdrop to spy and espionage movies. It's unfortunate that something that was supposed to untie the world in process of peaceful globalization has become mired in weight of it's own self interests. Hopefully this film will help bring back it's founders intent of preventing war, ensuring peace and human rights once more.
(Review by reesa)

Email ThisBlogThis!Share to TwitterShare to FacebookShare to Pinterest
Labels: Interview with Ami Horowitz, U.N. Me review