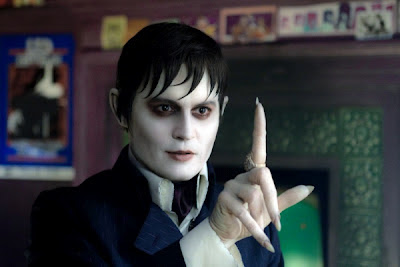 Tim Burton and Johnny Depp is synonymous with quirky atmospheric pieces team with mash up novelist Seth Grahame-Smith (Pride and Prejudice and Zombies and Abraham Lincoln, Vampire Hunter) with his first time screenplay replacing long time Burton scribe John August. The original ABC soap opera ran from 1966 – 1971 was unprecedented at the time when they introduced vampire Barnabas Collins (Jonathan Frid who passed a few weeks before movie opened) appeared a year after the soap started became a cult classic that is currently being shown on Hulu.com. The Burton/Depp version of Dark Shadows is set in 1972.

In 1752 Barnabas and his parents moved from Liverpool to North America settling on the coast of Maine where they started the town of Collinsport, ME. His father built the town from his successful fishing and cannery business. They built a huge mansion on top of the hill which they called Collinwood Manor. Playboy Barnabas breaks the heart of a manor maid, Angelique who becomes unhinged when Barnabas falls in love with Josette. The witch exacts revenge by making Josette jump off a cliff then she spells the young man into a vampire afterwards turning the town against him who bury him alive. Some 200 years later construction workers dig up the coffin to unfortunate consequences. The newly fed Barnabas returns to the now rundown mansion which is now occupied by his dysfunctional descendants.

Michelle Pfeiffer who is looking more amazing as she gets older plays the matriarch of the clan, Elizabeth Colling Stoddard. Her "ne'er-do-well" brother Roger Collins (Jonny Lee Miller) had just lost his wife at sea leaving behind her son David (Gulliver McGrath) who is having problems that they have a live in psychiatrist Dr. Julia Hoffman (Helena Bonham Carter). Elizabeth's rebellious teenage daughter Carolyn (Chloë Moretz) helps set the mood by playing come classic 70's tunes. There's also Jackie Earle Haley as Will the caretaker who becomes Barnabas's slave and Bellas Heathcote who place the David's governess Victoria who's the spitting image of Josette. Elizabeth explains the return of their ancient ancestor is explained as being a distant cousin from England. Barnabas plans to return the mansion and the family business to it's former glory. Their one big problem is the other fishery business belongs to Angelique who over the years has continued on her vendetta.

There's the usual fish out of water concept with Barnabas discovering the upgraded world speaking his old world English which all goes for the obvious laughs. Depp in white makeup looks like a great Halloween get up, drolls out the quips with his typical delivery. The goth mansion is great, but one expects the Munsters to come over for dinner which would have made this a more enjoyable movie. There's only so many pop culture jokes that could be spread through out. While at times enjoyable, it's more often a curiosity. The only flavor it retains from the soap besides the cheesy trappings is the appearance of some of the original cast including Jonathan Frid during a party scene that has Alice Cooper as the entertainment. While this movie will bring the fans of Depp/Burton and fans of Dark Shadows, it just won't satisfy them.
(Review by reesa)