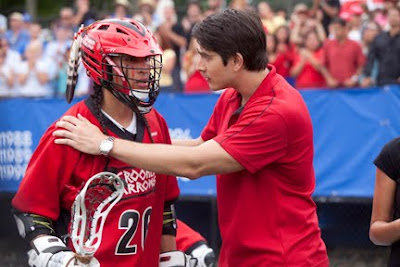 Lacrosse is a tradition of the Haudenosaunee nations, which include the Mohawk, Cayuga, Onondaga, Oneida, Seneca and Tuscarora nations. Lacrosse is known as the Creator’s game or a medicine game. Neal Powless, of the Onondaga Nation and co-producer of the film worked to ensure that the film had an authentic Haudenosaunee storyline. Directed by Steve Rash (Can't Buy Me Love) and written by Brad Riddell and Todd Baird the movie features a sport that has not been seen on the big screen since Last of the Mohican's by honoring it's origins. (There was the little seen The Creator’s Game (1999), a low-budget but well-received film starring Cree actor Dakota House).

Joe Logan (Brandon Routh, who is part Native American) runs the Wumpum casino on a reservation somewhere in upper New York State. Dressed in embarrassing stereotypical trappings he shamelessly entertains the guests. He's a bit of a shallow business man who has lost touch with his heritage. A developer wants to expand the casino, but Joe needs the approval of the council who agree by the promise of the financial gains that would help open a hospital. However the agreement comes with the stipulation that Joe go through a spiritual quest that would be overseen by his father Ben (Gil Birmingham). Ben assigns the quest to coach the tribe's lacrosse team which plays the prep school leagues and woefully so. The team used to be coached by his father and assisted by Joe's sister Nadie (Chelsea Ricketts). Joe who was a star player at one time, doesn't take his job seriously until he's guided by the tribe's wiseman Crooked Arrow (Dennis Ambriz). His sage homilies inspire Joe to take more responsibility with the teen aged team.

The reservation school is taught by Joe's old girlfriend Dr. Julie Gifford (Crystal Allen) who had written a definitive book on the Haudenosaunee Senequa people and whose son also plays on the team as the token white kid. The couple naturally butt heads in that cute flirty we got history but we can still be friends sort of way. This part also touches on the difficulties to bring quality teaching staff to the reservations and the ability to speak their native languages. It also shows the ambivalence of the teens to embrace and take pride in their cultural identity.

The producers looked for lacrosse players who could also act. Eight lacrosse players from or near the Onondaga Nation were selected. Three of the main players Shaye Thomas, Cree Cathers and Ty Hill currently play on the Onondaga Redhawks lacrosse team. The team which is so good had a hard time trying to play badly as the story required. The film also features cameo appearances from some local lacrosse coaches, West Genesee coach Mike Messere, and SU coaches John Desko and Gary Gait.

While the film depicts the usual underdog rallying at the end to win, the obvious characterizations, and the sometimes stiff acting it is saved by the spirit of the people it's portraying and the game of lacrosse. It's hard not to feel the people's pride in their sovereign nation. It's nice to be reminded that the indigenous inhabitants of this country still remain. There's an honesty in the last scene when the various nations come to cheer on the team. The 500 extras that showed up in red Crooked Arrow t-shirts took the filmmakers by surprise. The film if nothing else will hopefully help the Haudenosaunee players compete in the world championships after the incident in 2010 when the U.S. and the United Kingdom would not accept Haudenosaunee passports.
(Review by reesa)