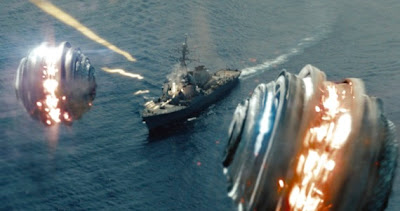 Somewhere along the way Director Peter Berg (Hancock) became the new Michael Bay. As the camera lingers on the patriotic sweeps of today's Navy and lingers with the our service men and women you can't help feel your heart swell with a source of pride, tears filling the eyes. Maybe this is just a diversion from the fact that this movie is based on a Hasbro board game where you have to guess your opponents placements so you can blow them up. Written by Jon Hoeber and Erich Hoeber, the usually static game has been expanded to include an alien invasion in Hawaii.

Taylor Kitsch plays Alex Hooper, the wayward younger brother of his Naval officer brother Stone (Alexander Skarsgård) who gives him the ultimatum of getting his act together or joining him in the Navy. It comes to a head when trying to impress a beautiful young woman at the local bar by promising to bring her a chicken burrito ends up into a mess. Of course Sam (Brooklyn Decker) also happens to be the daughter of the Admiral Shane (Liam Neeson).

A year later Alex is now a US Navy Tactical Action officer on a destroyer the USS John Paul Jones. His brother is the Captain on another destroyer the USS Sampson. Alex may be an officer and on the verge of asking the Admiral for his daughter's hand in marriage but he's still the kind of a guy that doesn't play by the book. During a war game exercise something crashes into the sea. Apparently signals sent out to space got a response, and one that no one expected.

How they manage to get the gist of the board game incorporated into the storyline is pretty creative and satisfying. But most of the movie is not about the game. It's about the rowdy irresponsible young man who suddenly has to step up to the plate. There's plenty of explosions, and FX battles to keep any scifi action nerd happy. The light weight dialogue is played laughs. Kitsch's bad boy that he's brewed since Friday Night Lights is still intact and snarky as ever. He's complimented by the casting of Rihanna as one of his tactical crew Petty Officer Weps who can handle a machine gun. Jesse Plemons another Friday Night alum shows up as Boatswain Mate Ord. Well known Japanese actor Tadanobu Asano adds some class to the film as Captain Yugi Nagata, JMSDF, Commanding Officer of the JDS Myōkō..

There's also a worthy nod to the men and women who have served our country and sacrificed their limbs. Sam who is a physical therapist works with double amputee Mick (Gregory D. Gadson) by hiking on Oahu to help with his prosthetic legs. They come across Adam Godley as Dr. Nogrady, the scientist leading the Beacon program who informs them that the aliens have taken over his satellite installation to send out another signal. While her boyfriend has to battle the aliens at sea, it's up to the rag tag group to stop the aliens on land. Old veterans also get their chance to shine when the USS. Missouri is broken out of it's museum ship status and into the think of battle . The vets are needed to show the younger generation the old school method of the fighting ships.

This film certainly doesn't rank up there with the Avengers, but for just a lark and a fun way to kill time at the theater one afternoon and thankfully it's not in 3D.
(Review by reesa)