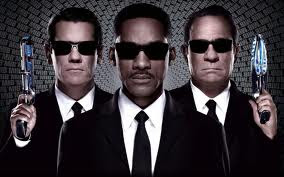 It's been fifteen years since the original Men in Black movie and ten years since the sequel. The continuing adventures of Agents K and J who work for a secret government agency that keeps the world from knowing there are aliens living among us is given a nice little tie up to K and J's relationship. Tommy Lee Jones as stoic K and talkative Will Smith as J have now been partners in this covert agency for 14 years. This time around the extraterrestrial villain Boris the Animal (“It's just Boris”) has escaped his prison on the moon for the past 40 years and threatens to rewrite history by eliminating his nemesis K who took one of his arms.

Director Barry Sonnenfeld is back with a script by Etan Coehn (Tropic of Thunder) , David Koepp, Jeff Nathanson and Michael Soccio who have worked on the story at various stages from a suggestion by Will Smith back when they were doing MIB 2. The process may have taken many years to accomplish, but the result is a satisfying afternoon for fans of the franchise. Smith and Jones in their buddy cop roles are opposites in style and attitude but have a deep respect for each other. This time they have added Josh Brolin as the younger K back in 1969. Emma Thompson plays Agent 0 with her younger self played by Alice Eve.

The whole “time jump” concept takes an old device and makes it fresh. J literally leaps into a Mad Men dressed world. There's also humorous commentary on how an African American dressed in a black suit is perceived in a racially confused world. The costumes and sets are like a pop culture reference book with the kick of Andy Warhol being a Men in Black agent, because everyone knows that all models are aliens. There they find Michael Stuhlbarg who plays Griffin the last of his kind alien. He has a gift which can also be a curse of seeing the future, or multiple, equally possible futures all at the same time. His takes on the possible scenarios on K and J's mission are funny and endearing. Boris ("Flight of the Conchords'" Jemaine Clement) of the future needs to stop Griffin from helping K put up the arc that protects earth from invasion and also keep him past self loose his arm.

There's no paradox problem that will make your head spin in this. The action is fast, the aliens among us are interesting and entertaining, not as confusing and overkill like in MIB 2. Big props go to Josh Brolin whose big forehead and mannerisms gets Tommy Lee Jones down to a T. K's younger version is less taciturn and gruff which makes J wonder what happened to turn him into the present day K. The ending also ties up the bond between mentor and student that will make one want to revisit the first movie. Especially considering most of the target audience is probably not old enough to remember the first movie, this works well as a stand alone film. Definitely worth the popcorn, but if you get a chance to see it without 3D go for it.
(Review by reesa)

Email ThisBlogThis!Share to TwitterShare to FacebookShare to Pinterest
Labels: Men in Black review