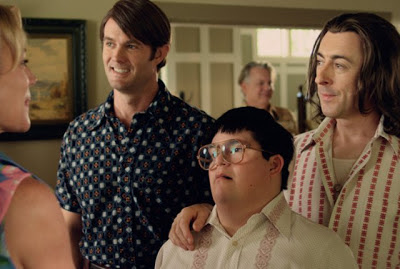 Hard to believe forty years ago, homosexual relationships were generally thought of as deviant behavior. Sure, that mindset still prevails in some red states in middle America, but those attitudes are dying out as same sex marriages are becoming law in across the US. This story set in the 1970's was directed and written by Travis Fine (The Space Between) with George Arthur Bloom about a gay couple who care for a down syndrome teenager chronicles the joy and heartbreak of a family that will not leave a dry eye in the house.

Rudy (Alan Cumming) is a drag performer in a California nightclub where he meets Paul (Garret Dillahunt). Divorced closeted Paul is immediately attracted to Rudy who becomes his first homosexual experience in the club's parking lot. Rudy chronically behind in his rent asks his druggie neighbor to turn down the music because not only is it annoying it's not good for her child's hearing. She ends up getting arrested by Vice and sent to jail leaving Marco (Isaac Leyva) to be taken by social services to a foster home but he takes off in the middle of the night to go back home. Rudy finds him wandering the streets and takes him back to his house. Rudy seeks out Paul's help who works at the District Attorney's office as to the welfare of the 14 year old special needs boy. Paul reluctant at first to help advises him to seek out temporary custody of the child from the mother. Marco also needs to live in a better environment where he can have his own room. Paul suggests that they move in with him and he tells everyone that Rudy is his cousin.

The instant surrogate family blooms and flourishes for at least a year before meddling eyes begin to question why Marco is drawing pictures of his family unit that has two daddies. Paul gets fired from the DA's office, and the boy is taken back into the social welfare system. The long protracted legal battle for the men to obtain permanent custody of Marco becomes the focus of the story on how unjust and unfair the laws are set up to discriminate against people based on their sexual orientation. Francis Fisher plays Judge Meyerson who rules against them, Gregg Henry is prosecuting attorney who argues that homosexuality is not a good environment for Marco, Chris Mulkey is Paul's former boss, and Don Franklin is their appeal attorney.

Cumming plays flamboyant Rudy with a quasi New York accent, long hair and flippant back talk. He's balanced by the quiet unassuming Paul. They only thing these two seems to have in common is their love for the withdrawn boy who like them is different and unwanted. Inspired by a true story it's a reminder of how society was not ready to accept two men (or two women) freely raising children despite the love and care they can provide. Unfortunately, there's still people who think that way and this is like a 2x4 across the head to wake up. Bring tissues for Cumming's vocal performance of I Shall Be Released at the end of the film.
(Review by reesa)

Posted by Dallas Movie Screenings at 12:58 AM

Email ThisBlogThis!Share to TwitterShare to FacebookShare to Pinterest
Labels: Any Day Now review