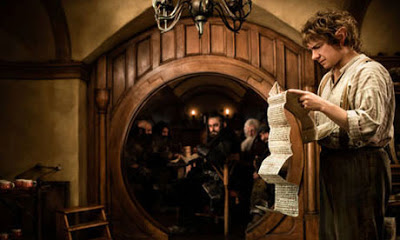 Director/writer/producer Peter Jackson successfully proved the existence of J.R.R. Tolkein's Middle Earth with the Lord of the Rings film trilogy. So it was fitting that he would take the helm the prequel of how the infamous ring came into the possession of the Hobbit Bilbo Baggins. The 1937 slim fantasy novel will be stretched out to be made into three films starting with this Unexpected Journey, then in 2013 will be The Desolation of Smaug followed the next year with There and Back Again. Guillermo del Toro who originally was tapped to direct joined co-writers Fran Walsh and Philippa Boyens. Illustrators John Howe and Alan Lee, art director Dan Hennah and cinematographer Andrew Lesnie are all back creating the familiar world with visual effects crafted by Weta Workshop. Howard Shore who scored by soundtrack for the Lord of the Rings is back highlighting the themes that made the first movies so memorable. A lot has been said about the 48 frames per second. The visuals at first seem like a live action anime until your eyes and brain become adjusted. Reportedly about 450 theaters out of 4000 in the US and Canada will have these projectors. Not sure if this particular advanced screening was with the normal 24 frames per second, but it was in 3D, and the picture was outstanding.

Martin Freeman plays the younger Bilbo Baggins who is recounting how the Wizard Gandalf the Grey (Ian McKellen) recruited his assistance in an adventure. Bilbo is reluctant to leave his small comfortable Hobbit home, content with his meals, his books and quiet life. Richard Armitage is Thorin the leader of the 13 Oaken Tree Shield dwarves who are set to reclaim their home under the Lonely Mountain which 60 years earlier was over taken by a dragon. Dwarves are master craftsmen of mining of gold and gems. The discovery of the Arkenstone by his father brought acclaim but also greed and power. Dragons known for their love of gold destroyed their kingdom scattering the inhabitants to live among the land of men. The plan to retake the mountain requires the need for someone small and stealth. Dragons know the smell of dwarves, but not that of Hobbits. They offer a contract to Bilbo to be their burglar.

Gandalf feels the presence of something amiss in Middle Earth and for reasons that will be explained later in the series, keeps disappearing then showing up at crucial moments. Orcs, trolls, goblins and giant spiders are being found away from their usual stomping grounds. The company's encounters with the various villains take up much of the story. In the book, each chapter contains an episodic quest that introduces the reader to specific creatures of Middle Earth. Bilbo who questions the wisdom of joining the group gains more confidence and competence, earning the respect of the tough loyal company of dwarves. Most of the time it's non stop action with brief respites in the Shire and the Elves home in Rivendale. Andy Serkis reprises his role as Gollum and we learn how he loses his “precious” ring to Bilbo.

The Hobbit series will once more bring the legions of LOTR's fans from their Hobbit holes during the holiday's in breathless anticipation for the rest of the series. Like the other movies, there's a lot of walking over the beautiful New Zealand landscape. It's a worthy and worthwhile addition to the Tolkein's Middle Earth legacy.
(Review by reesa)

Email ThisBlogThis!Share to TwitterShare to FacebookShare to Pinterest
Labels: The Hobbit: The Unexpected Journey review