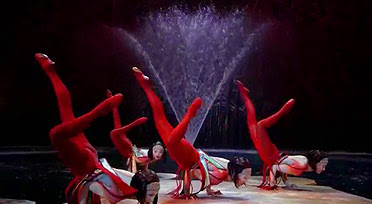 Most people who can't afford the huge ticket prices to attend a live performance of the Cirque Du Soleil will throughly enjoy the movie version in James Cameron produced 3D. Director/writer of The Chronicles of Narna:Prince Caspian, Andrew Adamson, brings to the screen of fanciful adventure of a young woman visiting a carnival who follows an aerialist through a wormhole into a visually gorgeous scenarios with slow motion acrobatics. Filmed during the live performances from various Las Vegas shows such as O, Ka, Mystère, Viva Elvis, Criss Angel Believe, Zumanity and The Beatles LOVE bringing the acts close and personal showing the astounding feats of athleticism and dance for better appreciation.

The young woman Mia (Erica Linz) in what would be considered the real world visits a small town carnival where she's given a flyer to see the aerialist (Igor Zaripov) in the big top by a creepy insistent clown. It turns out he's one of the circus hands that she had a love at first sight moment just moments ago. He see her in the crowd and is distracted enough to miss the swing, falling to the ground which begins to swallow him up. Mia rushes to save him and falls into the hole too. She wake in another world where there are several big top tents. Armed with her flyer, she begins to ask (or pantomime) if anyone has seen him. While she searches, we the viewers are treated to a series of different Cirque Du Soleil Fellini-esque costumed gymnastic wonders involving water, trampolines, human controlled wheels spinning around, contortionists, walls that float vertically and horizontally all to music, some of it Beatles tunes. The loose storyline involves Mia trying to find her aerialist who has been captured by some dark forces in this world, and their eventual re-uniting culminating in a aerial pas de deux.

There are times when there is some much going on, that one wished to see the live version to fully take in the experience. It's also amazing to be able to see the slow motion details of the physically demanding artistry of their movements. The point of view from the stage brings you as close as one can be to the action. The edge of your seats defying gravity moments give the illusion of human flight as one could possibly attain. How someone can hold another human being with just a foot while spinning around suspended from a rope. It's boggles the mind on how these unique individuals have been trained for such events while wishing the Olympics could have such beauty and poetry.

Some may argue that the Cirque Du Soliel should be seen live to enjoy the excitement and wonder. But this arm chair viewer was just as enthralled and excited, without having to pay and arm, leg, and a first child for the price of a ticket.
(Review by reesa)