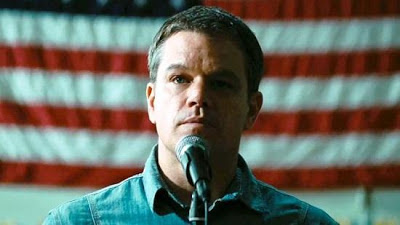 Director Gus Van Sand usually creates interesting character studies as in Milk, Finding Forrester, and My Own Private Idaho. Working with a script by John Krasinski and Matt Damon from a story by Dave Eggers, Promised Land comes off more quiet and laid back. It's sometimes curious, but mostly a sleepy small town vibe a lot of nothing really going on. It's a snap shot of America outside the city limits. The open farm land, the people struggling to survive. The diner filled with locals where everyone knows your name. The movie is saved by the performance of Matt Damon, who looks less like his Bourne hero persona and more like a high school English teacher.

Steve Bulter (Damon) plays a travelling salesman with his partner in crime, Sue Thomason (Frances McDormand) who visit the local farm owners to lease their land to the oil company. They scope out the lay of the land, even buying clothes from the local store. They play on the residents fear of the recession, and the promise that selling their drilling rights will infuse not only their personal lives, but that of their community with much needed income. Sue talks to the moms about schools, and Steve plays the father with security for their families in the years to come. Everyone has their hands out, even the local mayor who tries to grease the wheels for his own profit. It would seem like an easy one more town to add to their success and Steve's current elevation to a better position with the company. Except they hit a snag at the local town meeting when a high school science teacher begins to ask some serious questions on the wisdom of frakking (the process of extracting the gas and the poisonous chemicals that leak into the water table).

There should have been some intense debate of the pros and cons about the need to help make this country more energy dependent of foreign sources, helping to bring money to those in need, and the devastating effects like contamination, gas-powered flame leakage, and possible earthquakes. Only we get Steve digging his heels in to try and win over the people of the town with an earnestness like throwing a carnival. He's also distracted by a environmentalist that pulls into town. Dustin Noble (Krasinski) runs a green propaganda counter campaign to Steve and Sue. Steve is also attracted to a local teacher Alice (Rosemarie Dewitt) and there may be a little jealousy brewing as she seems to be spending time with Dustin.

Damon imbues Steve with a well meaning sincerity when he tells people that he's also from a farm family. He's kind, gentle, and people want to believe him. He gets a little out of hand when he starts to battle Dustin for the hearts and minds of the town people. Steve's company is also taking a close look on his performance too, which only adds to his dilemma. That's basically the only crisis that is happening in this film. There's a spin at the end of the movie, that you will probably see about half way through the story if you are still watching. Promised Land if full of promises, but that's about it.
(Review by reesa)

Posted by Dallas Movie Screenings at 1:39 AM