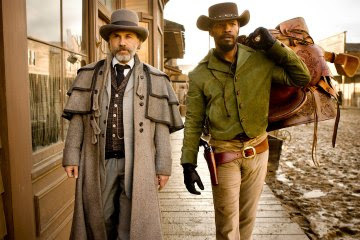 As I sat down to enjoy what I knew was going to be a great movie once again from Quentin Tarantino I knew I could expect two things: violence and an amazing script. But I never, ever expected that I would get as enthralled in this movie as I did. With superb characters, violence, a great script, and spot on casting this movie quickly became one of my top five movies of the year.

What probably shocked me most about this movie were the immense feelings I gained towards the characters. Whether I loved them or hated them, I became so connected to the characters as actual people that I actually put in thought as to whether I liked them or not. The greatest example of this was the Oscar-worthy performance put on by Mr. Christopher Waltz himself. In this film he plays Dr. King Schultz, a dentist-turned-bounty hunter who collects money for killing people. As soon as Waltz appeared on-screen he won me over with his quick wit and charm that isn’t found in a lot of characters. What I mean is a lot of characters have lines written for them, which is supposed to draw a laugh from the audience, but the line is just that, a line. It’s not the character’s personality, it’s just a line delivered by an actor who’s looking for a paycheck. What makes Waltz’s character different is how well he connects with it. Dr. King Schultz is a smart, witty man and that’s exactly how he is portrayed. If anything, it is worth paying to see this movie just for the sake of witnessing this astounding performance.

You could tell that Leonardo DiCaprio and Samuel Jackson had a blast playing the villains in this film. The roles were so sinister and heartless, at points it made you cringe. Once again, a brilliant script helped these characters come to life, but it was the performances that tied it all together. The only enactment that seemed mediocre was that of Jamie Foxx, who played the lead role Django (the D is silent). That isn’t saying that it was bad in any stretch of the imagination, but his character did seem to have the least amount of expression. Whether that was the script’s fault, or that of Foxx’s, it did come across as dry at times. However, that dryness was quickly overshadowed by the intense and exciting violence that appeared.

Violence. That has always been something the Tarantino has been fond of depicting, and he doesn’t hold back here. What is on display here is probably one of the most violent and sickening movies I have ever watched. If there were one thing to hold you back from seeing this movie, it would be that. I am not a very weak-stomached person, but even I had to look away and cringe at certain times. The most violent and horrific scene, in my opinion, is when DiCaprio and company are enjoying watching a Mandingo fight. (For those that don’t know what Mandingo fighting is, don’t feel bad. It is a fight to the death between two unfortunate slaves.) While I’ve seen action movies with two characters fighting and killing each other, nothing could have prepared me for this. I don’t know if it was the blood, the fighting, or the fact that other characters were watching this for entertainment, but something made me sick in this scene. All of this goes to say that the violence wasn’t bad or depicted wrong. Just be warned if you have a squeamish stomach that this will make you squirm.

What should also make you squirm is the harsh language that is thrown around like baseballs, more specifically, the “N” word. I would say that that word got tossed around about 100+ times. I’ve heard it in movies before, but never as much or as nonchalantly as it is used here. Once I realized that for the time that word was normal verbiage, it became easier to swallow. But even after that, it was hard to hear.

In conclusion, Django Unchained is a brilliant movie written and directed by Quentin Tarantino. The acting, the casting, the violence, the music, and everything just make this a must-see film. In my opinion, it is one of Tarantino’s best. He is definitely at the top of his game here and it shows. While not for the squeamish, this movie is sure to please. I give this flick a 9 out of 10 stars and I can not wait to see it again!
(Review by Weston Baker)