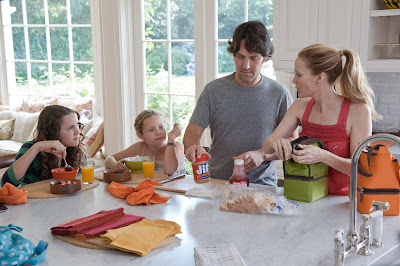 Judd Apatow, the genius behind Knocked Up and 40 Year Old Virgin, brings another coming of age story of white arrested developed adults starring his real life wife Leslie Mann and his real life children Maude and Iris. His movies are insightful and full of self involved grownups that do a lot of talking.

Debbie just turned 40 years old and in a complete state of denial. Her husband Pete (Paul Rudd) takes Viagra as a birthday present to bring more excitement for his wife. Unfortunately she doesn't quite see it that way. The crisis of getting older weighs heavily on Debbie's mind who decides to change the family lifestyle by diet, therapy, limiting social media access and adding spice to her relationship with Pete. Pete, who owns his own record company has put all this cards in with promoting Graham Parker who hasn't had a new record in 30 years, completely oblivious to the changing tastes of today's electronic/dance music trends. His finances are sunk and they may have to sell their house. Pete has to tell his father Larry (Albert Brooks) who has young triplets with his 2nd wife that he can't lend him money anymore. Debbie's dad Oliver (John Lithgow) has another wife and a young family doesn't spend time with her much to her regret. Debbie runs a boutique clothing store where Desi (Megan Fox) or Jodi (Charlyne Yi) may be stealing from her. On top of it, she finds out that she is also pregnant.

Chronicling the daily family life of a middle class couple while encountering their middle age will be familiar to anyone who has gone through this stage. The random sensibilities, insecurities, and interpersonal dynamics that often occur within a household, albeit with better dialogue. There's some really great lines like blaming JJ Abrams and hormones for their misbehaving 13 year old daughter. Charlyne Yi is brilliant as the pill popping Jodi. And Megan Fox shows off the hot bod for the husbands that will be dragged to this movie. There's lots of other interesting cast members like Jason Segel as Debbie's trainer, Lena Dunham ane Chris O'Dowd as Pete's employees, Tim Bagley as Debbie's gynecologist, and Graham Parker as himself as well as providing some really nice tunes.

Apatow knows how to create slice of life kinda stories. Nothing truly happens outside of an amusing glimpse of the trials and tribulations of privilege families. Yeah, the bankrupt company looms over Pete's head. They just need to sell their huge house to make up for it. Sure she's pregnant at 40, but they have good supporting friends and family to get them through. The only thing this couple seems to suffer from despite the constant talking is a failure to communicate. There are some laugh out loud moments due to some creative ad-libbing by the talented cast. It's a fun, kinda kill a Saturday afternoon sort of movie for the holidays.
(Review by reesa

Email ThisBlogThis!Share to TwitterShare to FacebookShare to Pinterest
Labels: This is 40 review