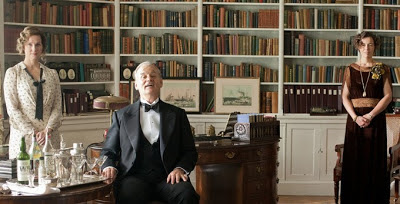 Margaret Suckley's private journals and diaries discovered after her death detailed her love affair with President Franklin D. Roosevelt during the later 1930's. Notting Hill director Roger Michell and writer Richard Nelson center the story on the visit of King George VI and the Queen Consort Elizabeth (the current Queen Elizabeth's parents) who had come to seek an alliance with the US as Europe prepares for a coming war. Roosevelt's image as a populist leader during these crisis years takes a hit as a philanderer and a bit of cad.

Laura Linney plays Daisy a 6th cousin who lives in the country caring for her aunt. She's resolved herself to a life of no expectations, but still dreams of something more. She gets a call from the Roosevelt matriarch (Elizabeth Wilson) to be a companion to her son while he stays at their upper New York family estate in Hyde Park as everyone else she called had some sort of excuse. His wife Eleanor (Olivia Williams) lives in a house with other women who make furniture. His faithful secretary Missy (Elizabeth Marvel) and staff take care of his official duties that otherwise keep him occupied. Daisy's job would serve as an attractive distraction for the President. Daisy is awkward at first, but everyone from the staff, housekeepers, and press seem to accept her right away. Roosevelt takes his cousin for long drives in his specially outfitted car for his polio crippled legs. They eventually consummate their relationship one day with the middle aged spinster giving the leader of the country a hand job in a convertible overlooking a serene hillside. Daisy becomes completely smitten with him.

The dalliances of men in power are nothing new, or particularly interesting unless there's some political subterfuge. It just works as a curious footnote in the life of FDR. Since this sordid affair can be no good for anyone, the story turns a lighthearted focus on the British royalty's visit to their former colony. No other seated king had ever visited the US before. The fish out of water scenario is the movies main amusement with King Albert and Queen Elizabeth (Samuel West and Olivia Colman) who are housed at Hyde Park in a room with anti-British revolutionary war political satire cartoons on the walls. The stammering king and his clucking wife stress over the a hot dog picnic organized by Eleanor wondering if they should be reading between the lines and be insulted.

Bill Murray does a decent job as Roosevelt capturing the tonal cadence of his signature speech patterns. Linney's presence is mostly a voice over narrative otherwise she stays mostly in the background even when she's in a scene. Her timidity only breaks when it's revealed that's she may not be so special after all in the president's life. Costumes, sets and vehicles echo the New Deal era with it's well appointed fashion and color. Everything is really lovely to look at, but although the movie is funny especially the scenes with the King and Queen, outside of Murray's amazing performance, there's nothing else happening at Hyde Park on Hudson.
(Review by reesa)

Posted by Dallas Movie Screenings at 1:06 AM