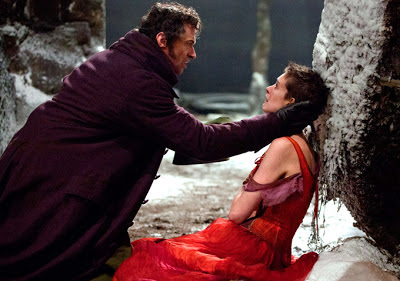 Victor Hugo's novel Les Misérables was published in 1862 and considered to be one of the greatest novels of the nineteenth century. Multiple versions of the story has been recreated in films, radio, animation and the stage. The classic tale examines the law, grace, politics, religion, class, philosophy, justice, romantic and familial love. Directed by Tom Hooper (The Kings Speech) with the screenplay by William Nicholson and Herbert Kretzmer based on the stage musical by Alain Boubill and Claude -Michel Schönberg covers a lot of ground. Basically the entire movie is sung and what is so unique is the fact it was filmed with “live” song performances. None of the sound track dubbed over the lip-syncing actors. The immediacy of this technique gives film a freshness and exhilaration as the actors can more effectively portray their emotional traumas.

Huge Jackman plays the lead role of Jean Valjean who is released from hard labor prison after serving a long term for stealing a loaf of bread. His nemesis is the righteous Inspector Javert (Russell Crowe) who believes once a thief, always a thief, who makes tracking down Valjean when he escapes parole his main mission in life. Valjean who was tired of being treated so unfairly finds his faith again, and recreates his life as an owner of a factory. Fantine (Anne Hathaway) works there is fired when it's discovered she had a child out of wedlock. Cosette (Isabelle Allen) is being cared for by Madame Thénardier and her husband (Sacha Baron Cohen) who are innkeepers that grif their guests. They are the comedic element of what is a very sad and serious story. Fantine pays them to care for her daughter, but without a job she is forced into prostitution. Valjean promises her on her dying bed to care for her daughter.

Years later, Cosette (Amanda Seyfried) falls in love at first site with Marius (Eddie Redmayne) who with his fellow students are organizing a revolution to protest class inequality and poverty. Marius comes from a rich family, but has denounced them in favor of his fellow students. Éponine (Samatha Barks), the daughter of the innkeepers has a secret crush on Marius. She's heart broken when he's head over heels in love with Cosette. Javert tries to infiltrate the protesters, but is discovered. Valjean comes to his rescue which causes Javert to question his own morals and purpose in live. Also Valjean wants to rid himself of his guilt and not cause any harm to his ward, Cosette.

There's lots of stuff going on in story, which seems simplistic here, but one has to remember that the entire movie is in song. Speaking “lines” is so minimal as to be non existent. The Broadway music score with it's 50 songs are so well known and familiar. The singing is handled well by the women in the movie, and less so by the main leads Jackman and Crowe. Anne Hathaway's big number “I Dreamed a Dream” will rip your heart out with is strong emotional accapella delivered in it's entirety in one uncut tight shot of her face. Every quiver, every flash of her eyes speaks of her despair, humiliation and mother's need to have her child survive. It's heart wrenching.

This is the kinds of movie that movies are about. It's big, messy, beautiful to watch. Costumes, details, sets, and acting will make this a film you can watch over and over, if only just for the music.
(Review by reesa)