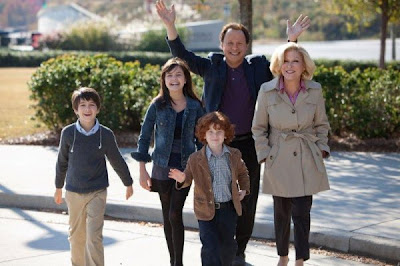 Better Midler and Billy Crystal have known each other for over 30 years, yet have never made a movie together until now. Now that they are old enough to play grandparents who stay at their daughter's house to sit with their three grandchildren. Director Alan Fickman (The Game Plan and You Again) knows his way around family comedies. Surf's Up writers Lisa Addario and Joe Syracuse team up again to add that good time feeling to the holiday movie season. It has all the formula moments that are helped by the stellar cast that know how to make a series of self humiliating scenarios amusing and not tiresome.

Crystal plays Artie Decke a just fired broadcaster for a Fresno baseball team. Artie is considered too old school. Diane (Midler) and Artie are asked as the last alternative by their type A daughter Alice (Marisa Tomei) to watch their children for a week. Alice's husband Phil (Tom Everett Scott) has developed a smart house and it's been nominated for an award to be announced at a resort. He would like to bring his wife for a mini vacation. His parents were not available which leaves only Alice's folks which makes her cringe. Their parenting style is opposite of the Decker's which means the kids are all neurotic. The older tween Harper (Bailee Madison) is stressing on her audition for a young adult symphony position. The middle child Turner (Joshua Rush) stammers and gets bullied by his classmates. The youngest Barker (Kyle Harrison Breitkopf) runs wild.

Do families like this exist in the real world? Hard to imagine that indulged youngsters being coddled by adults with baseball games that don't have “outs” so it's fair to everyone. How can they survive the modern world? When Barker takes off during a concert dashing around, most parents would grab the tyke and take him outside for some tough love. For storyline sake, the Decker's try to show the three kids there's more to life than being constantly politically correct. They try and do as their daughter's master plan dictates so they won't be known as the "other" grandparents. The only part that leads astray is Artie's foray into trying to get an audition with ESPN using his daughter's connection and pretending to be hip enough to commentate a skateboard competition doesn't really stay true to his character. It only sets up the real crisis in the whole film.

Diane seems truer in the whole grandma role as being the ready ear to tight as a drum Harper. She's under the gun to be successful that she doesn't know how to relax and be a kid. Artie has a better time communicating with Turner as he tries to negotiate sticking up for himself and finding his voice. Alice is the one that turns out to more whacked out by not being able to leave her brood with her folks. It's disappointing to Phil who is waiting for her at the hotel. Tomei does a good job as acting like a frazzled control freak. This is a perfect movie for the holidays offering the Crystal/Midler team to entertain the adults and their antics to make the kids laugh. The situations may be obvious and in lesser hands it would have been annoying. At least when Crystal and Midler harmonize to a little ditty towards the end of the movie, it can't help to make one smile.
(Review by reesa)