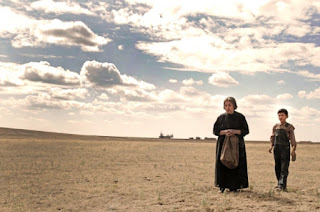 Director Carl Franklin (One False Move, Devil in a Blue Dress, Out of Time) adapted the 1972 novel by Rudolfo Anaya which has become the best selling Chicano novel of all time. Christy Walton, heiress to the Walton fortune set up Tenaja Productions solely to finance the film in 2009. Filmed entirely in New Mexico, the beauty of country side is what makes this movie unique and lyrical.

Narrating the story as an adult the voice introduces himself as Antonio (Like Ganalon) the seven year old son of Gabriel (Benito Martinez) and Maria (Dolores Heredia). It's sometime during the wanning years of the WWII when Ultima (Miriam Colon) comes to live with his family where she wants to spend her remaining days. Antonio has 2 older sisters, but Ultima focus's her attention on the bright and inquisitive younger boy. She can see the potential in him and asks him if she can teach him the ways of plants of herbs. Ultima is what is known as a “curandera”, a medicine woman, a “bruja”, a witch. This brings her under the suspicious eyes of the small farming community who are mostly Catholic. The three daughters of the local saloon keeper/barber Tenorio (Castulo Guerra) put a black magic spell on Maria's brother. Ultima is asked to attend him and brings Antonio to assist. Unfortunately the cure has some reprecussions, as all good witches know, what you put out comes back to you three fold, and the daughters start dying. This is the major crisis of the film as Tenorio tries to rally the town against Ultima in his anger.

Most of the time, we are enjoying the daily life of Antonio going to school, to church, or working in the fields with his family. The young boy also witnesses old time community justice when the the local men chase after a veteran suffering from post traumatic stress syndrome shoots and kills someone. He also sees the violent death of an old family friend and that of a school friend. For anyone that is pretty heavy stuff, but especially for a small young boy. Antonio also has three older brothers who return from the war changed young men. They don't want to stay and work the farm like their father who dreams of moving the family to California. But the boys have seen too much an they are restless and tell them he still has Antonio to raise to do what them are unable. Antonio is their last hope, and probably the only one who graduate from high school.

The complicated world and the varied role models encountered is what Antonio has to absorb as he struggles to find his sense of place. The performances are at times stiff as the dialogue is theatrical and over stated, probably more true to the novel. The landscape and photography is a delight to the eye and you can almost feel the warmth and smell the land. We can all use a wise woman to mentor us like Ultima who doesn't let petty distrust to her ways of the world keep her from doing her job. It's a sleepy film, lovely, lulling and the book is probably better.
(Review by reesa)

Email ThisBlogThis!Share to TwitterShare to FacebookShare to Pinterest
Labels: Bless Me, Ultima review