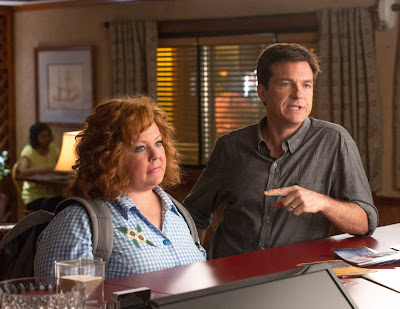 Let me just start off by saying, when I watch a comedy I hardly ever view it in the same way as I would a drama or action movie. With either of those movies, I dissect it and inspect every aspect of the story, acting, lighting, etc… But with a comedy, the only thing I look for is if it makes me laugh or not. Sometimes the acting, but the most important aspect of the movie in my opinion is whether it entertains and amuses me. So, in saying that, Identity Thief delivers.

The movie starts out with Sandy Patterson (Jason Bateman) getting a phone call from who he thinks is someone trying to protect his credit card. In reality it’s Diana (Melissa McCarthy), the identity thief. At the same time as Diana is stealing Patterson’s identity, he is in the process of quitting his job to start a new business with some work colleagues. Patterson is a family man with two daughters and another on the way. Financially, he’s making it, but it’s hardly enough. It happens that one day he is unable to pay for his gas. Shortly after that he’s arrested because of a warrant out for Sandy Patterson in Florida. But the Sandy Patterson that’s been arrested is living in Colorado and has never been to Florida. Thus, the cops call for a mug shot and realize that Mr. Sandy Patterson has had his identity stolen by a woman (McCarthy). Patterson then heads off to Florida to hunt down Diana and get his life back in order. Little does he know that this isn’t going to be some easy pick up, this is going to take work, and the work it does take is filled with laughs and several, “Oh my gosh I can’t believe this is happening!” moments.

Ever since stealing the show in Bridesmaids, Melissa McCarthy hasn’t actually “starred” in anything besides her TV show Mike & Molly. This is her first chance to carry a movie as a lead role, and she does a magnificent job of it. What’s great about her performance in this movie was not only that she drew several boastful laughs from your mouth, but that she was able to get extremely emotional when the script called for it, which isn’t something you see in most comedies. There were two scenes that were cutting to the core and made you really sympathize for McCarthy’s character. It totally came out of the blue, but it hit you like a ton of bricks when they appeared.

I really have no complaints about this movie, as a comedy. If this were a drama or an action movie, it might be a different story. In fact it would definitely be a completely different story. But as far as spending an hour and a half watching a road trip go wrong, there’s not too much to complain about. You spend over half of the movie laughing your butt off, and the other half you’re close to tears. Melissa McCarthy does a great job of carrying this movie and Jason Bateman does a great job of supporting her. Out of all the comedies that are going to come out this year, there’s no reason to not see this one. (Unless you just don’t like to laugh) I’d recommend heading to enjoy this one if you have any free time to spare or you want a nice laugh. I’m giving it 6.5-7/10.
(Review by Weston Baker)