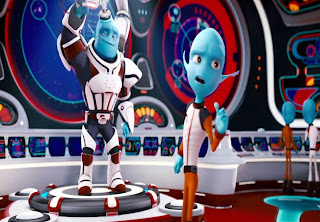 The first Rainmaker Entertainment film to be theatrically released is the family oriented 3D computer animated feature about aliens. Directed and written by Cal Bunker with Bob Barlen, the film languished in development when the Weinstein Company was sued by writer/director Tony Leech and Brian Inerfeld. Despite the infighting, the film finally reaches the big screen with a story that's full of adventure, lessons on family unity, tolerance and embrace our differences. It's Nickelodeon Jr's Yo Gabba Gabba for older kids.

On the planet Baat, the much admired space hero Scorch Supernova (Brendan Fraser) manages rescues and other astonishing feats with the aid of his mission control older brother Gary (Rob Corddry). Scorch has a habit of calling Gary his younger brother which irks the genius, nerdy sibling to no end. On top of it, Gary's son Kip (Jonathan Morgan Heit) is completely smitten by his uncle and wants to be just like him when he grows up. Lena (Jessica Alba) the head of BASA and their boss informs the team that an SOS was received from the dreaded dark region of space where many have gone, but none have returned. Flashy Scorch is ready to fly off right away, but Gary keeps warning him that more planning needs to be involved. They argue to the point where Scorch fires Gary, and Gary quits at the same time, both fed up by their mutual stubbornness. Scorch takes off anyways, and when the mission goes awry Kip tries to steal a ship to rescue him when Lena won't send help . Gary is reminded that family is what is important and not some ego sense to be right. It becomes up to Gary, his wife Kira (Sarah Jessica Parker) and Kip to save Scorch and the planet.

The planet in the dark area turns out to be Earth where the head of Area 51, Shanker (William Shatner) is holding various aliens that have come to earth over the years to steal their technology for profit. Shanker's is greedy over Scorch's space suit and wants to use Gary's science while holding his brother hostage. Gary is put with other aliens who believer Shanker will let them go home once they finish their work with Shanker. There's a mouse like alien, Doc (Craig Robinson), Io (Jane Lynch) a giant cyclops alien from the sun, and slug like Thurman (George Lopez) with three eyes and slime. When Gary discovers Shanker's ultimate plan to take over the universe, it's up to him and Scorch to work together to save the worlds.

It's nice to see the Gary's wife Kira is a strong and capable person in her own right when she's handling her end on Baat. Sofía Vergara shows up as the voice of news reporter Gabby Babblebrock, Scorch's girlfriend and Ricky Gervals is the snarky voice of the the main computer Mr. James Bing. If aliens from different planets get along and work together than we should all be able to face our worlds' diversity with same expectations. At least that seems to be the message to be ingrained in the young minds that will be attending this film with their parents.
(Review by reesa)

Posted by Dallas Movie Screenings at 9:48 AM