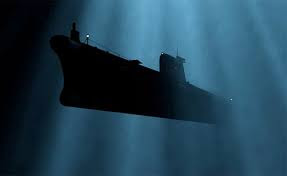 In the 1968 the K-120 Russia submarine was sunk with all 98 hands lost. It was later recovered the CIA. There was also an undetonated nuclear missile found in the Pacific. What happened to the submarine and missile was the inspiration for the film written and directed by Todd Harrison. It's based on the book Red Star Rogue by Navy veteran Ken Sewell who also served as technical consultant. It's a nice packaged thriller only offset at first by the actors not affecting a Russia accent. When your mind wraps itself around the fact that it's ok they are supposed to be Russians, then you can relax a bit and enjoy the story.

Ed Harris is Dmitri Zubov, a Soviet Navy captain who is being forced to retire after a spotty career. His own father was a famous officer who pretty much wrote the book on Soviet submarine warfare. He is given the command of a sub that's to be decommissioned for it's last run as it's already been given to the Chinese. It's the sub that was Dmitri's first command and in which he tragically lost some men. He himself suffered a brain trauma that causes him to have epileptic fits and he's often haunted by images of fire and death. His loyal first officer Alex (William Fichtner) tells him some special guests are on board to supposedly test some equipment on this mission. Bruni (David Duchovny) a KBG officer is in charge of the group of some shady characters who are not very friendly or forthcoming. In fact some of the new crew on this run have suspicious records. Alex believes they may be extremists. Dmitri is even more alert when the equipment they test manages to mask their signal, virtually making them sound like a merchant ship to a passing submarine. When Dmitri collapses in a seizure, Bruni uses his illness as an excuse to take over the ship. He separates the officers and takes away their nuclear launch keys. Dmitri figures out that he was chosen for this mission because they figured he would fail. It's up to Dmitri and Alex to take back their ship and stop the bad guys from starting a war.

Submarine movies are by nature cramped and crowded, but the actors seem to have adapted to moving quickly and stealthy through the tight spaces, pipes and equipment. The hierarchy of command on a Russian sub is also controlled by the political officer (Johnathon Schaech) who has to keep the Party informed and the captain in check. It's bad enough working in a small space, but having someone always looking over your shoulder to make sure you do things the proper Russia way makes for even more claustrophobia. When push comes to shove, battling on board and random bullets flying seem sort of ill advised when the ship is underwater. Director Harrison keeps this thriller tight but not exactly gripping and the ending is somewhat confusing at first. But the movie does explore the ideas of loyalty and honor and that's not a bad thing.
(Review by reesa)