Bullet to the Head 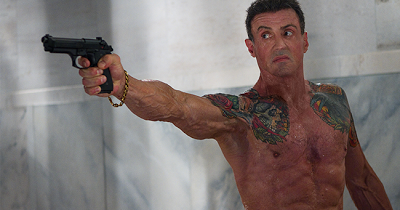 Sylvester Stallone is like the Jack LaLanne of action movies. If you recall Jack LaLanne was the preeminent health and fitness guru back in the 50's, 60's and 70's, keeping himself buff until his death at 96 years of age. At 66, Stallone has a few miles on his face, and his enunciation still sounds like he has marbles in his mouth. Standing straight back and walking stiffly, he's still kicks butt in this new film directed Walter Hill (48 Hours, Streets of Fire, Red Heat) and adapted from Alexis Nolent's graphic novel Du Plomb Dans La Tete by Hill and Alessandro Camon.

Hitman Jimmy Bobo (Stallone) gets angry when he's double crossed on an assignment and his partner Louis (Jon Seda) is killed. He ends up teaming with a Washington DC detective Taylor Kwon (Sung Kang) who comes to New Orleans to investigate the death of the rouge cop that Jimmy put down. The idea is that they can share information to help each other since Jimmy wants to get paid and get revenge on the guy who killed Louis. Taylor is very idealistic and is often conflicted when dealing with Jimmy's way of doing things, like shooting everyone when they are done questioning them. The local police department made him give up his gun in their district and obviously up to no good. He has no choice but to join forces with Jimmy. The plot has something to do with bribes, payoffs, Senators, government officials, real estate, and money. Bad guy Morel (Adewale Akinnuoye-Agbaje) doesn't trust anyone who doesn't put money first. Including his hired mercenary Keegan (Jason Momoa) and his yesman Marcus Baptiste (Christian Slater). There's also Jimmy's tattoo artist daughter Lisa (Sarah Shahi) who serves as the pretty young thing and possible love interest for Kwon,

It's a blunt, violent, yet a lot of the action is played for laughs. The earnest young cop using his cell phone to gather intel vs the dinosaur who blows things up. Stallone delivers the lines from one side of his mouth, and his dead pan delivery keeps the movie from being just another revenge thriller. Sung Kang balances Stallone's one note criminal but has to deal with all the racial references that are insulting and annoying for anyone who is of Asian descent. Momoa does a good job as the hired killer who thinks himself a hero in his work. The ultimate mano a mano with the sadistic Keegan even includes fireman axes. The action is well paced and at times fun to watch. Granted most of the movie is predictable with testosterone overkill, the soundtrack is distractingly loud with it's jazzy New Orleans rhythms, the plot holes big enough for the Titanic, it's still somewhat a curiosity just to see Stallone at the Turkish bathhouse showing off his tattooed shoulders.
(Review by reesa)

Posted by Dallas Movie Screenings at 12:02 AM

Email ThisBlogThis!Share to TwitterShare to FacebookShare to Pinterest
Labels: Bullet to the Head review