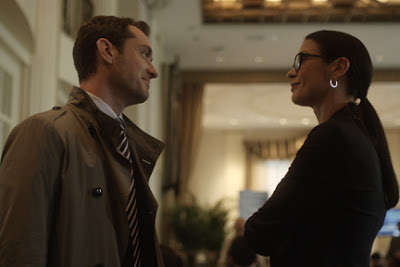 Steven Soderbergh directed Contagion from a script by Scott Z. Burns. Now they are back with another medical mystery thriller, Side Effects. Soderbergh who also directed Ocean's Eleven, Traffic and Erin Brockovich takes on pharmaceuticals with a fictional anti-depressant called Ablixa, complete with fake ads that could be in any magazine or television. The visuals of watery grey New York City evoke the sense of dreary gloom amidst the day to day existence. The whole movie seems bathed in a flat pallet. You are ready to start taking those drugs just to make everything all right and in color again. Soderbergh has said that Side Effects will be the last movie he will direct for the big screen because he wants to paint.

The movie opens with blood on the floor and bloody foot prints before it tells you the story that started three months earlier. Rooney Mara of The Girl With The Dragon Tattoo plays Emily and looks a little more womanly, although she is still waif thin, fragile and vulnerable. She is waiting for the day her husband Martin (Channing Tatum) will be released from prison where he's spent the last four years on a charge of insider trading. Martin met someone inside prison who is offering a way to make all his money back and he is gung-ho promising they can get back the good life when he was a successful hedge fund manager. However, it appears that their time apart has not been kind to Emily. She's a quiet, pensive and sad. For no apparent reason she runs her car straight into a wall in the parking garage. The suicide attempt brings her to smooth, competent Dr. Jonathan Banks (Jude Law). The different drugs that he subscribes doesn't seem to help. She feels nauseous, lowered libido, and can't concentrate. On the suggestion of Emily's previous therapist Dr. Victoria Siebert (Catherine Zeta Jones) she is offered Ablixia a new drug on the market. Emily says it's better but her husband is concerned when she starts sleepwalking.

The world of pushing pharmaceuticals by drug companies is lightly touched upon when Banks is offered to do a trial study that will net him an extra $50,000. Bank's wife just lost her job so the extra cash is attractive. His practice is busy and it supplements his work at the hospital consulting for the police. He lives in a nice Soho loft with his wife and stepson. It's a shock to Banks when he almost it all when something terrible goes wrong and he's being fingered as the doctor who should have known better. He looses his patients, his practice, his wife and stepson. The story shifts gears as Dr. Banks becomes obsessive to discover how all this happened.

Soderbergh paces the story very slowly to the point of it's almost too sleepy. Mara's Emily exudes an aura of someone who needs protection from her strong handsome husband, to concerned Dr. Banks and even from the chilly Dr. Siebert. As the tables begin to turn, the action becomes a little more urgent as Banks gets anxious to clear his name and make things right again. Law does an excellent job of a psychiatrist who is good at what he does, but suddenly has to defend how he does business causing his associates and wife are quick to cut him free. There are some questions that nag as the story quickly closes in a nice clean package. It's an interesting mystery, but at times felt a little manipulative. If nothing else, you will be reading all those side effect warnings when you pick up your next prescription.
(Review by reesa)

Email ThisBlogThis!Share to TwitterShare to FacebookShare to Pinterest
Labels: Side Effects review