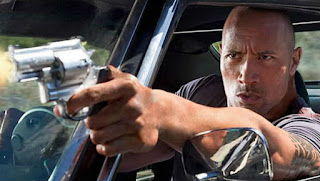 There was a documentary about how the changes in the federal drug policy in the US encouraged the incarcerated to “snitch” on their accomplices which inspired the screenplay written by Justin Haythe and rewritten by Ric Roman Waugh who also directed it. Dwayne “The Rock” Johnson usually plays the action-hero and he's built to take tuff, but in this he's just an everyman looking to help his family. It's nice to see him in a plain sort of role, but it's hard to imagine him not taking out the bad guys in a couple of punches.

John Matthews (Johnson) runs a successful construction trucking business whose son is arrested for drug trafficking when he's framed by the friend who mailed him the big bag of ecstasy. Jason (Rafi Gavron) faces up to 30 years of jail time unless he turns in the dealers who were buying the drugs. He refuses to purposely set someone up because doesn't know anything, but the law is the law according the the federal prosecutor Joanne Keeghan (Susan Saradon). Matthews offers to find the dealers on his own. Some of his employees have questionable pasts like Daniel James (Jon Bernthal) who did time for drug distribution. Daniel wants to get away from that life for the good of his family, but the offer of $20,000 by John just for an introduction will help him move out of his poor neighborhood. Daniel's old partner Malik (Michael Kenneth Williams) sets them up for a run to test them. Unknown to Daniel, John is working with undercover Agent Cooper (Barry Pepper) who has everything wired. Keeghan says if they can get Malik then she can reduce Jason's sentence to a year with time already served he would get out in 6 months. But things get hairy when the chances for a bigger fish presents itself and the prosecutor gets greedy.

Johnson has wisely surrounded himself with very competent actors. Melina Kanakaredes is his ex wife Sylvie and Jason's mother. Interestingly Jason doesn't look like either of the actors as his parents. Benjamin Bratt is nice to see on the screen again as the menacing drug cartel lord Juan Carlos “El Topo” Pintera. Pepper and Saradon elevate the film as something a bit more than another thriller. The director was a stunt man, so there's lots of good action sequences including a car chase involving a 18 wheeler. The lesson of the unfairness of the federal policy to mandate jail time no matter what the circumstances is brought home every time John visits his son in jail and he's been beaten and abused. But it doesn't quite explain why the DA would support John's attempts to put himself in harms way in exchange for bringing in the bad guys. Isn't that the job of those federal agents? And all these criminals with guns don't seem taken aback by the size of The Rock getting out of his big truck, which means it would have been more believable if a normal looking dude was in the role. Overlooking the holes, this movie is actually fairly more enjoyable than it should be.
(Review by reesa)