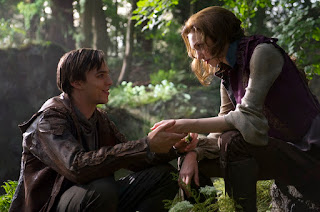 The current trend of translating childrens stories into action/adventure movies continues with the re-imagined version of Jack and the Beanstalk. X-Men director Bryan Singer is at the helm with a script written by Darren Lemke, Christorpher McQuarrie and Dan Studney. The young boy Jack is now a young man and the giants that live at the top of the beanstalk are lead by a two headed org looking creature and they have a taste for humans.

Nicholas Hoult who charmed us in Warm Bodies plays the farm boy who lives with his uncle on his deceased parents land. Jack, like all young boys were raised on the stories of a race of giants who once came to earth but were turned away by the good king Eric who used a magic crown forged from the heart of a giant. As long as the crown was in the hands of Eric's descendants the land would be in peace from the giants. Enter the princess Isabelle (Eleanor Tomlinson) who like all refurbished female characters of fairy tales, have more than just a heart, they have grit. Isabelle is looking for an adventure and is not happy to be wed to smarmy Roderick (Stanley Tucci) the adviser of the her father King Brahmwell (Ian McShane). Jack comes to her rescue when she is being harassed and their meaningful quick eye contact sparks interest between them. When Isabelle runs off in the middle of the rain it's no surprise when she ends up at his front door for shelter. Jack who had a fight with his uncle when he came home with magic beans in exchange for his horse gets caught up with Isabelle as his house rises upward when the tossed beans erupt into the sky because they were touched by water.

The CGI effects and the motion captured giants play heavily in the visuals as the king orders Jack, the loyal first knight Elmont (Ewan McGregor) to climb the stalk and save his daughter. He also sends up Roderick who with the help of his evil henchman Wicke (Ewen Bremmer) who have plans of their own. Bill Nighy grumbles loudly as the two headed leader of the giant army rallying the troops to head down the stalk to feast on human flesh. There is a lot of running around (like can a small human really out run the stride of a giant?) by Elmont, Jack and Isabelle as they try to thwart the invasion and warn the unsuspecting humans down below. Director Singer knows how to pace the adventure so that it's flows and spaced with comic relief like Elmont being rolled in dough along side of a couple of pig as in “pigs in a blanket”, ready to bake.

It's hard to imagine that this movie is aimed for children despite it's fairy tale roots. There's some unsettling moments of the rescue party falling to their demise from the stalk. A cut stalk crashing to the earth into countless buildings and stuff, and giants stepping on their victims or eating off their heads. However, this film is actually better than it has a right to be, mostly saved by the great cast. McGregor is low keyed and insightful as the dutiful knight who is loyal to the kingdom. Tucci stands out as the evil and oily adviser. But it's the sweet romance between Isabelle and Jack that holds the movie as Jack proves that even a commoner can become worthy of a princess. The 3D version probably isn't worth the extra cash for the glasses. It's just as enjoyable in regular 2D.
(Review by reesa)